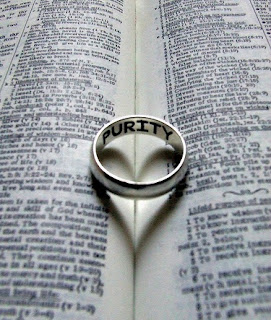 Image via http://upload.wikimedia.org/wikipedia/en/8/81/Sringthing.jpg
Formal virginity pledges are a fairly recent phenomenon, starting in the early to mid 1990s.¬† Though individuals have often pledged to wait until marriage before having sex, it wasn’t until 1993 and the founding of True Love Waits and followed by The Silver Ring Thingin 1995 that girls (and some boys) formally pledged to remain sexually pure.¬† True Love Waits current pledge states:
“Believing that true love waits, I make a commitment to God, myself, my family, my friends, my future mate, and my future children to a lifetime of purity including sexual abstinence from this day until the day I enter a biblical marriage relationship.”
For those of us not so biblically minded, this can be a rather disturbing pledge in a variety of ways.¬† I would never say that a policy of abstinence is a bad thing.¬† Abstinence is the only surefire way to avoid sexually transmitted diseases and pregnancy, and I think most people would argue that sex and its accompanying emotions are complex enough that most teenagers are not equipped to properly deal with the consequences.¬† However, it is not the pledge of abstinence that I find so troubling; rather, there are several other, more insidious factors that are truly unnerving.¬† The implications of pledging yourself to an as yet unknown future: a future husband and future children, neither of which you may ultimately want or get.¬† Compounding the issue is the age of many of these girls; though the ‚Äúsuggested‚Äù age for girls taking a purity pledge is shortly after beginning menstruation, 7 and 8 year old girls (and some as young as 4) have attended purity balls and signed a pledge with their fathers.¬† At these father-daughter formal balls, the girls pledge themselves, but additionally, the fathers pledge to protect and ‚Äúfight for‚Äù their daughters’ virginity (and give them a ring, in what has been often described as a ‚Äúcreepy‚Äù wedding-style ceremony).¬† The fathers will vow something along the lines of:
I, my daughter’s father, choose before God to war for my daughter’s virginity.
I acknowledge myself as the authority and protector of my daughter’s virginity.
I pledge to be a man of integrity as I lead, guide, and pray over my daughter and her virginity. (From the documentary Daddy I Do)
Again, I’m a firm believer in, if not abstinence until marriage, waiting until you are truly ready.¬† That means knowing the responsibilities and dangers of sexual activities, being prepared emotionally, mentally, and physically, using appropriate protection, and (occasionally old-fashioned lass that I am) preferably waiting until you have an emotional connection with your sexual partner.¬† These pledges, however, remove not only sexual experience from the picture, but also any knowledge.¬† By pledging to not have impure thoughts, you essentially remove all sexual education and knowledge from the picture, because talking about it might inspire these impure thoughts.¬† Additionally, the father’s pledge is shockingly sexist and controlling.¬† I can’t speak for all girls and women, but even as a girl, the notion of my father being the ‚Äúauthority‚Äù of my virginity would have‚Äîat best‚Äîembarrassed and grossed me out.
The truly disturbing factor of virginity pledges and their associated purity balls is the extreme lack of education these girls (and boys) receive.¬† Generally they receive abstinence-only education, and when they do break their purity vows (it’s estimated that 90% will do so) they have no knowledge or understanding about birth control pills, condoms, or STDs.¬† This is made even worse if they’ve been surrounded by people who pass on misinformation like ‚Äúcondoms don’t work,‚Äù as Denny Pattyn of The Silver Ring Thing does.¬† While condoms are not 100% effective, to say they are faulty is accurate and harmful, and can cause girls to be distrustful of any and all birth control.¬† Is it any wonder that so many teen mothers come from abstinence-only backgrounds?
For more information on these topics, you can watch the documentary Daddy I Do.¬†¬†There, you can also look for screenings near you, or ask to be put on the wait list for the DVD.
-Katie Weidmann
Junior Girl
Girl Museum, Inc.
DONATE NOW