Why I Game: Bekkah 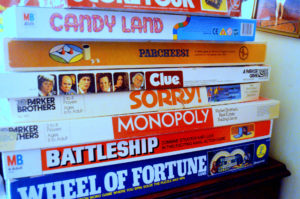 As a little girl I spent a lot of time following my brother around. I had two sisters but I wasn’t really into the girly stuff and I was more interested in what my brother was doing. I’d follow him when he went to play football with his friends, I’d sit and do homework with him after school and I would watch him play video games for hours.

Video games became a huge bonding aspect for my brother and me. We would play together all hours of the night until he left for college. It wasn’t until years later when I spent a spring break with my brother that I found my love for video games again. He bought me a GameCube just like he had when he was in high school. He passed down some of his old games to me and we immediately had ‘our thing’ back.

When my family moved and we were closer to my grandma, my love for board games grew as well. My sister and I would sit around the kitchen table with our cousins and our grandma playing Scattegories, Dominoes and Scrabble, but usually my grandma beat us all at that one!

Sitting around that kitchen table gave me an opportunity to learn from my grandma. I heard so many stories about my family’s past, different recipes, sewing secrets and so much more. It was during those times that I really appreciated the simplicity of games and how it brought my family and I closer together.

Whether it was board games or video games, I have always had a connection to them. Not because I’m overly competitive or because I’m really into them, but because when you’re sitting down and playing a game with someone, it gives you a chance to talk and to share. While gaming, you create a bond with others and today, that has a chance to really grow. There are internet games, live streaming and chat parties where you can game with someone who could be thousands of miles away.

Gaming truly connected me to my family and that is exactly why I game.