Will the Olympics give lesser known sports time to shine? 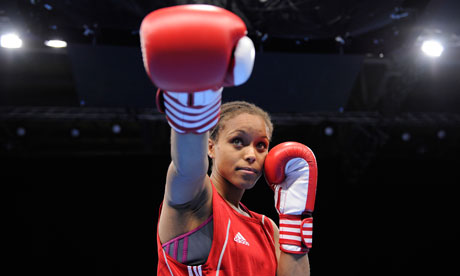 Natasha Jonas, one of Team GB‚Äôs elite female boxing squad.
Photograph: Tom Jenkins
http://www.guardian.co.uk/sport/2012/may/16/london-2012-natasha-jonas-olympics
This summer, the Olympic Games are coming to the UK and I am one of those definitely looking forward to it. The thing I love most about the Olympics, in all its incarnations, is discovering a new or unfamiliar sport. Sport coverage in the UK is dominated by football (soccer). Some other sorts, notably rugby, cricket, and tennis get coverage as well, but football is the king of sports here.
I am not a fan of football. I have nothing against the game itself, but I loathe the commercialisation of the sport and so-called WAG (Wives and Girlfriends) culture, which holds having and spending money and looking good whilst doing so as the prime reason for living. I also dislike the fact that many people seem to believe that I should be interested in football…just because. I have heard people say that it is ‚Äúunpatriotic‚Äù not to support my local team or even the national squad, as though my love for my country is solely bound to the activities of 12 men and a ball on a pitch.
Where is the love for other sports? For that matter, where is the love for women‚Äôs football? At last year‚Äôs Women‚Äôs World Cup, the England squad made it to the quarter-finals, further than the male 2010 World Cup squad. TV networks and advertisers clamour to show and sponsor male football because it draws in so many viewers, but how can viewers learn about a sport that is never promoted?
Women‚Äôs sport is particularly let down in this regard, not just in football but across the board. Off the top of my head, the only sports played by women that feature on mainstream media over here are tennis and athletics. Yet in the 2008 Olympic Games, 43% of the medals were won by women¬†in events such as cycling, swimming, sailing, equestrian, and Tae Kwon Do. I didn‚Äôt even know there was a Tae Kwon Do category, let alone that we had a female gold medallist! This year, advertisers seem to have begun to take notice of female athletes; it would be fantastic if this interest could continue into the Games themselves.
I hope that I won‚Äôt be the only person to discover a new sport to follow (or even participate in) this summer. ¬†Women‚Äôs boxing makes its debut this year, and Team GB‚Äôs competitors, including Natasha Jonas, Nicola Adams, and Savannah Marshall, have been winning medals around the world. My knowledge of boxing comes solely from watching Rocky, but I‚Äôll definitely be following the fortunes of these trailblazing women; I just hope I‚Äôm not in the minority.
-Sarah Jackson
Junior Girl
Girl Museum Inc.
DONATE NOW