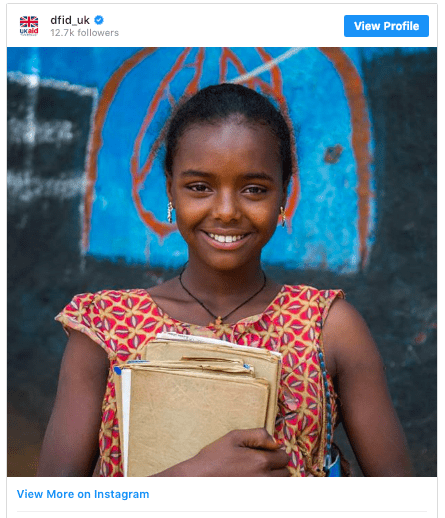 Seriously, this issue blow my mind and enrages me almost more than any other. How parents of girls or boys can think this could ever be acceptable shows my cultural intolerance. But I don’t care. There is almost never a good result for girls when they marry so young, physically, economically or psychologically. We have two positive and two very disturbing stories in this issue. Mestawet Mekuria, from in the Amhara region of Ethiopia, defied her parents when they told her she was to be married and went to the police. Only 14, Mestawet wants an education, not marriage. With over 56% of girls in her region being married off before age 18, she was very brave to report her parents as these marriages are against the law. Over in Indonesia, activist groups are pushing to raise the legal age of marriage, which is 16 for girls and 19 for boys, with many girls being married much earlier than this. Indonesia’s highest court ruled that the government must change the minimum age for girls as it was both discriminatory and out of line with child protection laws. This is a great step for millions of girls there.

In contrast, a parliamentary motion in Iran to ban child marriage was rejected. The legal age for marriage there is 13 for girls and 15 for boys, with one source citing more than 300 girls under nine, and between 30,000 to 40,000 girls under 13-14 years old marry in Iran. The counter argument is that early marriage prevents girls from getting abortions or becoming prostitutes. A pretty damning view of females really. And in the final infuriating news, US Immigration has approved thousands of applications from men wanting to bring underage wives into the country over the past decade. Many of these would have been coerced or trafficked. The Immigration and Nationality Act does not set minimum age requirements for these marriages, only determining whether or not the marriage is legal in the home country and in the state in which they will live. And many states in the USA have a lower than 18 age of consent. This exposes a true hypocrisy on part of the USA to champion human rights and the protection of children while allowing, even enabling, abuses within the country. If you are interested in more information about these issues, listen to our latest GirlSpeak podcast, coinciding with our Girl for Sale exhibition relaunch.

In closing out today, I wanted to note how justice can begin to be restored as Cyntoia Brown was granted clemency by the outgoing Governor of Tennessee. Hopefully, society will open its arms for this woman who has been through more than anything we could imagine.