A Girl in the Great Depression (America) 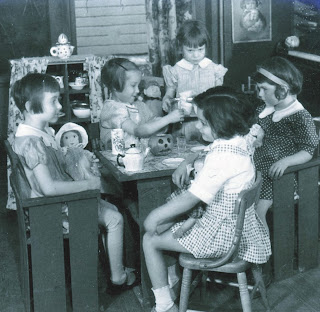 Young girls having fun at a tea party. Their table and chairs are made from crates!
http://www.antiquetoychest.com/2010/10/halloween-tea-party-girls-circa-1935/
Do you have an elderly relative who insists on washing, flattening, and saving aluminum foil for reuse? Or maybe a grandparent who hoards change? Did they grow up during the Great Depression? Life for children in the Depression was very different from the way later generations experienced childhood. What exactly did girlhood during the Depression entail? Read on to find out!
The Depression was a hard time for people throughout the United States and the world. Those in urban areas were hard hit when factory workers lost their jobs. The Dust Bowl hurt farming families in the prairie regions of the U.S. and Canada. As unemployment surged, daily life changed for families. Children began doing odd jobs such as selling eggs to neighbors. Many had to stop attending school to work or because their family had to move often. Over 250,000 teenage girls and boys left their families so there would be fewer mouths to feed.
The previous decades had been relatively prosperous and young girls had grown up with nice dresses, hair ribbons, and dolls. That all changed during the depression era, but girls still found ways to enjoy being a kid. Many toys like race cars or scooters were made at home from recycled items such as orange crates. Dolls could be made from old rags and buttons. Flour companies began putting different attractive prints on their flour sacks so that mothers would be more likely to buy their flour so that the sacks could be made into dresses.
A great book about girlhood in this time is Out of the Dust, by Karen Hesse. This Newberry Medal winning novel is about a young girl growing up on a farm, facing the many hardships presented by the Dust Bowl.
Life during the Depression was tough for kids, and many young girls had their childhood cut short as a result. However, with some creativity girls were still able to wear pretty dresses and play with dolls. The generation of girls who grew up in this era learned at a young age to value the things they did have.
-Hillary Hanel
Junior Girl
Girl Museum Inc.
DONATE NOW