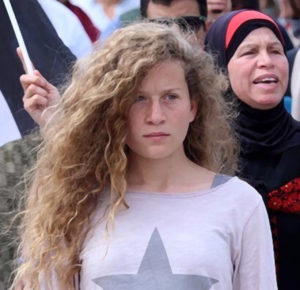 Ahed Tamini came to prominence around the world in 2017 when a video of her slapping an Israeli soldier went viral. She was arrested and sentenced to eight months in prison and was released at the end of July 2018.

Ahed grew up in a very politically active family. They would frequently protest the arrest and detention of Palestinians, as well as the expansion of Israeli settlements. On December 15, 2017 she joined her family in protesting Donald Trump’s decision to acknowledge Jerusalem as the capital of Israel. During this protest Ahed’s 14 year-old cousin was shot in the head by an Israeli student. He required major surgery to remove the rubber bullet lodged in his brain. That same day two Israeli soldiers came into the family’s yard. Ahed asked them to leave and when they didn’t she slapped them. This was videoed and quickly went viral on social media. She was arrested and sent to prison until her sentencing in March of this year.