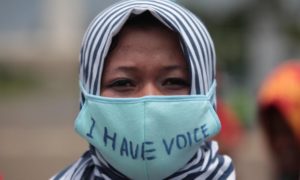 In July of this year there was outrage around the world when a 15 year-old girl was imprisoned in Indonesia. Her crime was having an abortion after being repeatedly raped by her brother. She was sentenced to six months in prison, while her brother was sentenced to two years in prison. The girl’s mother may also face charges for helping her daughter get an abortion.

Indonesia has very strict laws surrounding abortion; it is only permitted if the woman’s life is in danger or if she has been raped (but only up to 40 days). Women’s rights and child protection activists met shortly after the verdict was announced and began working on having the girl released. They argue that she should be treated as a victim, not a criminal. They met with the Indonesian Judicial Commission to discuss the case – they agreed to review the case within 30 days, but as of yet no decision has been made.

This case highlights the strict laws govern Indonesia. Since the trial of the girl concluded, activists have argued that in cases like this abortion should be viewed as a medical case and not a crime. The fact that a victim of crime was subsequently treated as a criminal shows us that girls and women need to be treated with more compassion.