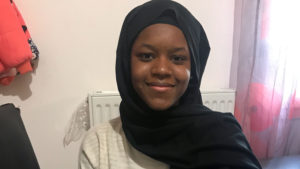 Zaynub Affinnih, the activist who brought attention to Noura Hussein. Image from CNN.

In May of this year Noura Hussein was sentenced to death. She was 19 years old. She had been found guilty of murdering her husband after he raped her. In June her sentence had been reduced to 5 years in prison.

Noura was forced to marry her husband when she was 16 years old. Her husband (who was also her cousin) was 32 years old. She was forced into the marriage by her family but quickly fled her new home. She was tricked into returning to her husband where she claims that when she refused to have sex with him she was pinned down by his cousins and raped. The next day she feared that it would happen again so she stabbed her husband to prevent it. Her father brought her to the police station where she was subsequently arrested.

In Sudan boys and girls can be married from the age of 10 and marital rape is not against the law. Amnesty International had created a campaign called ‘Justice for Noura’. Emma Watson was one of the many celebrities who lent their support. Since this story garnered international attention, Amnesty International have called for this sentence to act as a medium for change in Sudan; going forward they want girls and women to have more rights in the ultra-conservative country.