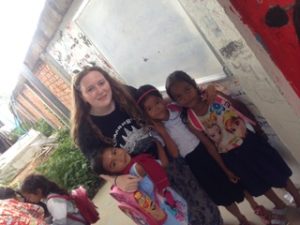 In September I was fortunate enough to travel to Cambodia for three weeks and work in a school teaching English. The people I met there and the children we taught were incredible and I fell a bit in love with the place. The school was in a small village in the South of Cambodia and rural does not even begin to describe it; most of the people who live there work in the rice fields that surround the school on all sides. ‘Hope School,’’ as it is so accurately named, offers the local children an opportunity to learn English for free with the aim of improving their lives through education. Many of the challenges to the Cambodian education system stem from poverty: a lack of resources, shortage of teachers, and too few schools in rural areas are just a few of the issues that are preventing wide spread education across the country. The country is also still in the process of rebuilding its education system after it was destroyed by the horrific Khymer Rouge regime.

Another issue that became very clear after only a short time in this part of southeast Asia is gender disparity. Hope aims to empower all the local children through education but there is a special focus on women and young girls — and this is necessary. Poverty in Cambodia means families often cannot afford to send all their children to school and so young boys are prioritised. This means many girls do not gain the necessary education. Furthermore, it is often the case that young girls are taken out of school after only a few years to help with work in the house or in the fields.

As a result, prostitution is extremely common. This was something I was aware of before arriving but I was still shocked. On Tuesday evenings we would travel from the school to the project’s orphanage to play football with the children there. It was on this road that the magnitude of the problem became clear. Sat beneath red lights, at regular intervals and on both sides of the long main road, were large groups of girls. They were doing each other’s makeup whilst preparing for the night’s work and some looked no older than some of the teenage students we taught at the school. In fact, considering around 30% of sex workers in Cambodia are under the age of 18, it would not surprise me if some of them were the same age as our students.

This highlighted the importance of what we were doing, giving the young girls at the school the opportunity to become doctors, teachers, bankers, business owners so that they do not have to turn to prostitution. The education system in Cambodia is improving quickly, but it must consider women in its developments if it is to allow all of its people to empower themselves, achieve their goals and fundamentally improve the growth of its economy. My time in Cambodia was incredible; it is a beautiful country with loving, welcoming people and incredible sights. I only hope that projects like Hope, and promises of improvements to education for all will make it a fairer and better place for its young girls and women.