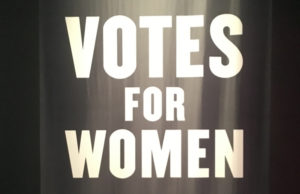 This past summer, I spent the day exploring London with my Mum; looking around Borough Market, eating lots of Thai Food and visiting the Votes for Women display at Museum of London. My mum is undoubtedly the strongest, most hard-working and courageous woman I know and so I felt anything related to women’s rights and suffrage would be perfect.

The display focused on the 100 years since the Representation of the Peoples Act, 1918 was passed in the UK. The act granted women over the age of 30, who had property rights, the right to vote. (The act also gave all men over the age of 21 the right to vote but we won’t tackle that inequality today!) The women’s fight for the vote was won by the courageous and determined suffragettes/suffragists across the UK – fronted by my heroine and namesake, Emmeline Pankhurst. This year there have been lots of wonderful events, exhibitions and museum projects connected to the centenary and as a proud feminist I am excited to explore as many as possible.

I will start by saying, the Votes for Women display is a lot smaller than I’d imagined it would be… I think because I’d seen so much advertising and online marketing I was envisioning something a lot bigger and grander but what we found was a relatively small room (which was poorly signposted) and a handful of objects related to the 1918 campaign. Nevertheless, the objects that the Museum had selected to highlight, were powerful. 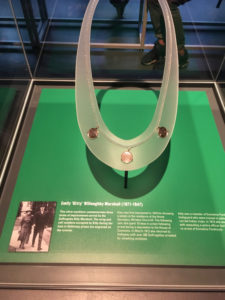 Along one side of the room there are cases exhibiting delicate, individual objects such as Emmeline Pankhurst’s Hunger Strike medal and a silver necklace commemorating Emily ‘Kitty’ Willoughby Marshall’s three terms of imprisonment in Holloway prison.

Projected on the opposite wall is a powerful film commissioned especially for the exhibition, which looks at how the Suffragette’s fight impacted Britain – both positively and negatively – and how their militant campaigns impact and influence fights for women’s rights in today’s society. Although Votes for Women wasn’t as fulfilling as we’d hoped, the Museum of London does also have an incredible permanent display of suffragette material in the People’s City gallery. This part of the Museum was by far our favourite and includes plenty of suffrage related objects to satisfy your needs!

This beautiful piece of tapestry is decorated in purple, white and green embroidery and was made in Holloway Prison by an inmate called Janie Terrero. It is embroidered with the names of hunger strikers imprisoned at Holloway with Terrero. The women had been arrested for their involvement in smashing windows as part of a suffragette campaign in March 1912. 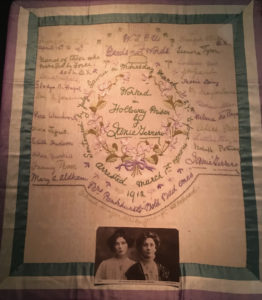 In the People’s City gallery, and briefly in the centenary exhibition, the Museum of London explores the Hunger Strike campaigns carried out by suffragettes in the early 20th Century.  The badges, medals and artwork are made using the recognisable green, purple and white colours associated with the Suffragettes.

Of course, the themes and stories shown in this display are incredibly important to exhibit in our museums as are the events being held throughout the year. 2018 seems to be shaping up as the year that we are telling local, national and international stories of courageous women who fought and continue to fights for women’s rights in the UK and around the world. I feel very lucky to be living in London right now to be able to participate in a variety of events, attend talks and visit centenary exhibitions to honour the incredible women who changed women’s lives in the UK.

However, I would agree with many others who argue that these kinds of displays and events should not be ‘special’ or ‘one-offs’ or curated just when an important date is impending. Instead, they need to become embedded in our museums, galleries, libraries and heritage spaces and we, as museum workers, collectors and heritage organisations should be documenting and collecting the work, stories and history of women to make it part of the norm. Uncovering stories that we are maybe not aware of, showcasing women that aren’t well-known and continuing to shine a light on women in fields that we have failed to do so up until now is just as important as having centenary exhibitions to celebrate famous women’s achievements.

Perhaps following the suffragette’s motto of ‘Deeds Not Words’ would be a good start for the sector.