Girl Risks Life to Save Boy 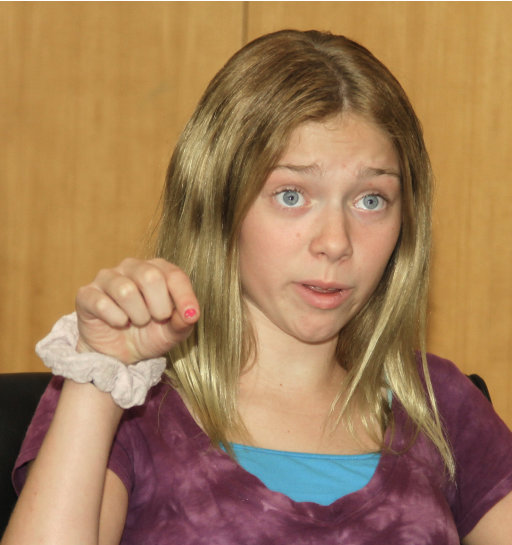 Nicole Kissel, 12, describes how she attempted to rescue drowning victim Dale Ostrander, 12, during a press conference.
Photo by Don Ryan / AP
http://news.yahoo.com/girl-put-life-line-save-wash-state-boy-070434933.html
Nicole Kissel, a twelve year-old from California, put her life on the line to save Charles ‚ÄúDale‚Äù Ostrander. As Dale, a twelve year-old from Washington, struggled to stay above the surface of the Pacific, Nicole heard him yell, ‚ÄúHelp! Help!‚Äù
Nicole turned her boogie board around and started paddling in Dale‚Äôs direction. Nicole‚Äôs father shouted for her to return due to the dangerous conditions, but Nicole reached Dale and pulled him onto her board. Paddling towards the shore, turbulent waves knocked Dale and Nicole off the board. Although Nicole was able to get back on her board, Dale disappeared back into the water.
Meanwhile, Eddie Mendez, a volunteer water rescuer, changed into his wetsuit and with a colleague, launched two jet skis. They pulled Dale out of the water and performed CPR until Dale was transported to a nearby hospital. Dale‚Äôs pulse returned and he was sent to OHSU Doernbecher Children‚Äôs Hospital in Portland, Oregon.
Authorities believe the ‚Äúreprieve on Nicole’s board helped spare the life of 12-year-old Charles “Dale” Ostrander.‚Äù
Dale was moved out of intensive care on Wednesday, August 11 and is in fair condition. Nicole visited Dale and spoke with the press about what happened before official rescuers arrived at the scene.
Nicole refuses to be called a hero. ¬†She believes she did what anyone else would do. “When someone is about to drown or someone needs help, you don’t really think about it before you go out to help them,” Nicole said.
Nicole will be returning to California soon to go back to school. Nicole told the press that she ‚Äúmight tell her friends that she almost drowned, but won’t say that she was saving someone’s life when she did.‚Äù She just wants to keep life ‚Äúnormal.‚Äù
To learn more about Nicole Kissel, please read¬†‚ÄúGirl who helped save Washington boy from drowning provides more details of ordeal.‚Äù
-Samantha Bradbeer
Junior Girl
Girl Museum Inc.
DONATE NOW