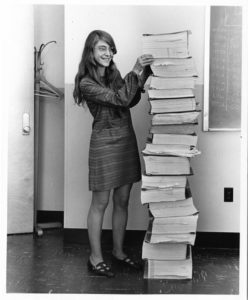 Margaret Heafield Hamilton standing next to a stack of Apollo computer code in the 1960s. Photo Credit: NASA.

Good Night Stories for Rebel Girls is a global best-selling, and New York Times bestselling book written by Elena Favilli and Francesca Cavallo. As of March 2018, Elena Favilli and Francesca Cavallo have turned Good Night Stories for Rebel Girls into an equally successful podcast. Episode one is narrated by Poorna Jagannathan, an American actress and producer who is best known for her portrayal of Safar Khan in The Night Of. She reads the inspirational story of Margaret Heafield Hamilton, sharing the life of the incredible scientist.

The Good Night Stories for Rebel Girls podcast is immersive, using engaging but unobtrusive sounds to illustrate the story of Margaret Heafield Hamilton. Background music, clips of news reports, sound effects illustrating Margaret typing and the melodic voice of Poorna Jagannathan makes the episode a fun and fascinating listen. While the episode is fascinating for an adult listener, I can imagine how engaging it would be for a young child too. While the content isn’t at all dumbed-down, its colloquial and friendly storytelling style makes it accessible to everyone. While a young listener may not understand software engineering, the story has enough wider context to share the story of Margaret Heafield Hamilton and how computers helped get an astronaut to the moon.

Episode one starts off with Margaret Heafield Hamilton’s childhood and how her inquisitiveness lead her to constantly ask questions of her father, which he gladly answered. Her curiosity led her to pursue academia in the 1950s, where she majored in maths, of course, one of the only female students in her class. Her professor, however, was a woman, who had worked at the university since 1914 — long before computers or software engineering.

Working in the 1960s, not particularly a time renowned for encouraging women to pursue successful careers in STEM, Margaret Hamilton faced many challenges to succeed in her career as a computer scientist, systems engineer, and business owner. She originally intended for her job at the Massachusetts Institute of Technology, where she worked on weather prediction software, to be an interim short-term job to support her husband, James, while he attended Harvard Law School. Of course, a woman financially supporting her husband was practically unheard of at this time, so that alone is pretty inspirational. The podcast doesn’t hesitate to highlight this.

Feminism is a big part of the Good Night Stories for Rebel Girls podcast — while the podcast recognises the incredible work that Margaret Heafield Hamilton did, it also acknowledges the gender imbalance that she faced in her career and personal life. At 23 Margaret became a mother, while James was still at Harvard. Notably in the podcast, Poorna Jagannathan reads that Margaret did not consider herself a ‘Harvard wife’ and wouldn’t be content just pouring tea and raising a child while her husband studied. So, on occasion, she even needed to take their toddler Lauren to work with her. Lauren would use the lab like a playground, playing as an astronaut, undoubtedly seeing her mother as a role-model.

Women in STEM in the 1960s however, took their careers seriously, fully aware of their outnumbering. As written by Rose Eveleth for the Smithsonian magazine: “They simply saw computer programming as an easy job. It was like typing or filing to them and the development of software was less important than the development of hardware. So women wrote software, programmed and even told their male colleagues how to make the hardware better.” Eventually, Margaret Hamilton became the Director of the Software Engineering Division of the MIT Instrumentation Laboratory, and is even credited with coining the term “software engineering.”

She is now in her late 70s and still runs Hamilton Technologies, the company that she founded in 1986, based in Massachusetts. In 2016, Margaret was awarded the Presidential Medal of Freedom by then-President Barack Obama, the nation’s highest civilian honor. Today, she remains an icon for women working in science and technology and makes a fascinating and inspirational topic for the first episode of the Good Night Stories for Rebel Girls podcast.

Stay tuned for my review of the next episode of the Good Night Stories for Rebel Girls podcast, where Diana Nyad reads the story of Yusra Mardin, a teenage Syrian refugee and Olympian.