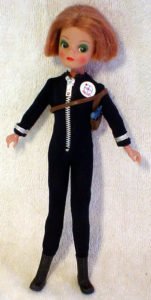 Havoc dressed in a navy blue jumpsuit and white boots.

There wasn’t any other doll quite like Havoc in early 1970s Britain. This was because Havoc was a “fearless, fiery” super-agent who had the “skills and daring to surmount every hazard, outwit every foe.” She did not come equipped with a hair brush and comb but instead a training pack which featured a Karate outfit, tommy gun and a bullet proof vest. I wouldn’t have known about this very little known 70s doll had it not been for my Mum.

Havoc was an unusual toy both then and now – she didn’t have long hair like Barbie. Plus, she wore a jumpsuit accessorised with green eyeshadow and bright red lipstick. Not much was known about Havoc’s own background. She was a newspaper reporter and Havoc was the alias she assumed for her undercover work. Her main foe was Dr. Grizzle of S.M.O.G.G. International – a shadowy organisation which stood for Spying, Murder, Outrage and Gold Grabbing. Havoc went on many missions to fight organised crime taking place around the world. Some of these missions saw her go as far as Venice and Sweden. In Sweden, Havoc was responsible for recovering stolen plans for a new secret atomic rocket by the Swedish Defence Ministry. She was quite stylish too. Her involvement in foiling an assassination plot in Amsterdam was carried out in a matching red hat, boots and glasses. Even Action Man couldn’t quite beat that!

Despite the doll’s short life span, Havoc did lead the way for other action heroes including a doll version of Joan as Policewoman. Later on, Barbie too acquired her own karate outfit. We can be rest assured that Havoc was a true heroine of the 70s doll scene, and I would argue that is her most lasting legacy.