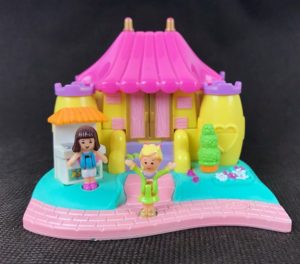 If you were a child of the 80s and 90s, you may have owned a set of Polly Pocket. Alongside Kylie, Polly was the other pint-sized superstar making her own waves. In her heyday, Polly stood at an inch tall with her immaculately tailored curly blonde hairdo. She also spent a lot of time indulging in the high life at a variety of bespoke chalets, beach houses and castles. At other times, she was the down-to-earth girl who hung out with her friends at the ice-cream parlour, toy shop and pizzeria.

It would be fair to say that Polly was a very girly-girl adorned in glitter and an array of pastel colours. Polly also maintained a fierce sense of independence. This was a girl who knew exactly what she wanted and most of the time she got it. Did anyone say no when Polly wanted to star in her own ballet? Alongside the collectable sets, girls could collect Polly Pocket themed jewellery and accessories. Yes, girls too had the opportunity to indulge in Polly’s lifestyle of luxury.

Key to Polly’s success was her size – girls could carry the collectable sets around with them. Not only did Polly like to spend time with her friends, girls were encouraged to do the same. They could arrange play dates with their friends and Polly. But Polly was ahead of the game in other ways. She set a trend for miniature boys’ toys when Mighty Max later arrived on the toy scene. Polly may have been small but there was nothing small about her success. Over 10 million sets were sold at the height of the popularity of the toy. Even today, the popularity of Polly Pocket continues. Toy company Mattel has recently relaunched the toy in its original micro-size for 2018. Watch this space, Barbie!