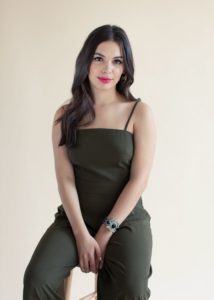 Over the last year, our own Contributing Writer Tia Shah, has been writing an amazing column about trailblazing girls throughout history. This new Incredible Girls column is in that vein, only this column is about contemporary girls under the age of 25 who are doing awe-inspiring and significant things in the world. Every Friday in 2019, we are going to post a column detailing the life of an Incredible Girl and why you should know about her. Read on for a glimpse into the life of Isabella Gomez.

One of my favorite shows on Netflix is the family dramedy, One Day at a Time. It’s made me laugh, made me cry, and is definitely comfort food for the soul. This week’s column is about one of the young Latinx leads of the show — 20-year-old Isabella Gomez, who plays Elena Alvarez, a queer, badass feminist, and one of the two children on the show.

Isabella is awesome, and I’m here to tell you why. First up, her life before her big Hollywood break. Isabella was born in Medellín, Colombia and moved to Florida with her parents when she was 10 years old. While in Florida, she learned English and worked with a vocal coach to lessen her accent. She got into acting as a child, and moved to Los Angeles at 15 to further her acting career. Two years later, in 2016 she got the role of Elena Alvarez in One Day at a Time, which also stars Justina Machado and Hollywood legend Rita Moreno. The show is a remake of the 1975 Norman Lear sitcom and stars a loud, loving, funny, hectic Cuban intergenerational family and some of their friends, just living their lives and dealing with big issues including immigration, substance abuse, sexuality, PTSD, veterans assistance, race and “passing” and many other relevant issues in 2019. ** Minor spoilers ahead**

Isabella’s nuanced, funny, gripping portrayal of Elena is so important. Throughout the first season, Elena is discovering her sexuality, and coming to grips with what that means for her, as well as figuring out how to tell her family, and what it means when some of her family members refuse to accept her sexuality. Like I said, so important. This is the hill I will (probably) die on, but once more for the people in the back: representation matters. Feeling properly represented in the media and being able to see yourself in the media, whether it is an LGBTQ issue, whether you’re Cuban or whether you are a veteran, whether you see yourself in the political arena — being able to see yourself, period, reflected in the media is a beautiful thing. And Isabella, and this show, are giving that to so many people. Putting representation aside, the show is also just downright hilarious and all around excellent. I dare you not to laugh out loud. In addition to playing a queer character and taking on the responsibility of the role, Isabella is also active in trying to increase Hispanic representation in Hollywood, in front of and behind the camera.

In an interview with Vanity Fair, Isabella said that playing Elena is important and has taught her a lot about herself, about privilege and about comedy. Asked about her portrayal of a queer character, and representation, she said that it’s a lot of responsibility, but it is incredibly important to get it right. “It is so cool to be a vessel for Elena,” she says. “And it’s so mind-blowing that me having fun and getting to do this character that I love can do that for somebody.” Isabella’s portrayal of Elena is funny, hilariously awkward at times and deeply relatable. I can’t wait to see what she does next in her career, but I also can’t wait to see her on Season 3 of One Day at a Time, which premieres in a few weeks! She is a worthy addition to my Incredible Girls column.