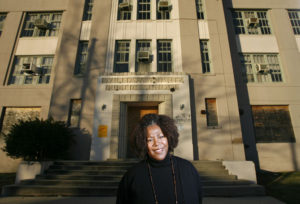 In this column, I’d like to celebrate the Cultural Landscape of Girlhood. Cultural landscapes is a branch of study that looks at how an entire landscape — not just a building, but the land, artifacts, and monuments surrounding it — impacts our understanding of history and culture.  Everything around you shapes your daily experiences — from how far you drive to school to how accessible resources like water and food are to your home. And this has been true for every girl in history -– her life is profoundly shaped by the community in which she lives.

In advocating for a better world for girls, we often focus on modern-day problems: access to resources, ability to gain an education, etc.  et a major part of inspiring girls and proving that their unique culture is integral to our human history are the stories behind historical sites where girls lived and died. Where they became the incredible women whom we remember and celebrate today. Where their contributions have not been forgotten.

Our second stop is William Frantz Elementary School.  Now, that name may not ring a bell, but there is one image that you might recognize: Norman Rockwell’s The Problem We All Live With.  This drawing was originally published in Look magazine and depicts the Civil Rights struggle of the 1960s through the story of one incredible girl: Ruby Bridges.

Ruby was born in Mississippi and raised in Louisiana.  At the age of 6, she went down in history when her parents volunteered her to participate in the integration of the New Orleans school system.

Until this point, schools in New Orleans had been segregated — that is, students’ placement at schools was determined solely by their race. This often left African American and other minority children disenfranchised — their schools suffered from the funding and lack of resources as a result of discrimination. During the Civil Rights movement, and following the decisions of Brown vs. The Board of Education case in the Supreme Court, schools were desegregated, and Caucasian and minority children went to school together for the first time in many places. 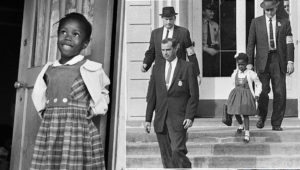 Ruby Bridges in a portrait at her home (left) and being escorted by the U.S. Marshals (right). Photo Credit: watchtheyard.com

Ruby’s story made national headlines. She was one of only six children in New Orleans to pass the test that determined whether she could go to the all-white school. Yet Ruby became extraordinary, because she had to go to William Frantz Elementary by herself. She described the day, stating,

“Driving up I could see the crowd, but living in New Orleans, I actually thought it was Mardi Gras. There was a large crowd of people outside the school. They were throwing things and shouting, and that sort of goes on in New Orleans at Mardi Gras.”

Ruby was escorted into school by U.S. Marshals, who commended Ruby on her bravery. She never cried or whimpered, but instead just “marched along like a little soldier.” Only one person agreed to teach Ruby at the school — Barbara Henry, a teacher from Boston.  For over a year, Ruby was taught on her own by Barbara. She was also only able to eat food she brought from home, as she was often threatened with being poisoned by those who didn’t want her at the white school.  Every day, she faced threats, angry comments, and even effigies of herself placed in coffins as she made her way to school. Her family also suffered — with her father losing his job, their local grocery store refusing to serve them, and her grandparents being turned off their land.

Today, Ruby still lives in New Orleans and chairs the Ruby Bridges Foundation, which promotes tolerance, respect, and appreciation of all differences in an effort to combat racism. Her elementary school still stands, now accepting students of all races and backgrounds, a silent witness to the echoes of the not-so-distant past.