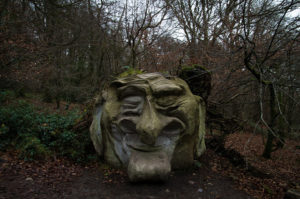 Cailleach is a creator and weather deity in Gaelic mythology, portrayed as a hag or older woman. The word “Cailleach” means hag or veiled in Scottish Gaelic. She’s also known as Beira, the deity of the winter in Scottish mythology.

The 20th century text Wonder Tales from Scottish Myth and Legend, by folklorist Donald Mackenzie, describes her origin as a creator deity. The mountains and hills of Scotland were believed to have been formed while she was walking across her land, and accidentally dropped rocks onto the ground. Other stories show Cailleach placing these rocks intentionally to use as stepping stones. Her hammer also carved out the numerous valleys. As well as a physical creator, she is also credited with the creation of the Scottish Pantheon.

Cailleach personifies and rules over the winter, which she does through terror. Her reign begins on the 1st November, the official first day of winter, and continues through to 1st May, which is known as the first day of summer. In this role she holds a staff which freezes the ground as it hits. Local legends tell of her providing sunny and bright weather on the 1st February each year, if she intends to make the winter last. This was believed to be so the people could gather replenish their firewood for the further coming cold months. Therefore, a wet and dark 1st February was celebrated as it meant the winter would soon be over. At the end of winter she throws this staff under a holly bush, ready for the following year.

Despite being the personification of the winter, Cailleach is also believed to be the force behind the spring. In this role, she nourishes the seeds under the ground through the cold, and provides them with an opportunity to grow during the spring. It is this dual personification that results in her being a goddess of death and rebirth.

Traditionally in Scotland and Ireland the first farmer to finish the harvest would make a representation of Cailleach from the final sheaf of the crop. This figure would then be tossed into the field of a neighbour, who had not yet finished their harvest. Whoever had this figure by the end would be responsible for caring for the figure until the next year, to provide a successful crop.

The Cailleach is particularly prominent in the landscape of Scotland, with her being referred to as the “Witch of Ben Cruachan” or the “Cailleach nan Cruachan.” Ben Cruachan is the tallest mountain in the region, neighbouring Loch Awe. She was said to oversee the well at the top of the mountain, and responsible for stemming the water flow each evening by placing a stone slab on top. One day she fell asleep from exhaustion and the well overflowed the valley below through the Pass of Brander, thus creating Loch Awe.