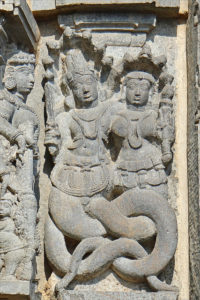 Naga and Nagini. Temple of Chennakeshava at Belur, India. Photo by Jean-Pierre Dalbéra.

Nagini is the Sanskrit word for a female deity who takes the form of a large snake, usually a king cobra but occasionally any others in the ‘naja’ genus. Her type appears in the Indian forms of Hinduism, Buddhism, and Jainism, where she is occasionally a counterpart to a male ‘naga’.

The most prominent nagini in Hinduism is Manasā, the goddess of snakes. She is specifically invoked as a prevention and cure for snakebites, which are common in the region. However, she is also known to be worshipped for fertility and prosperity elements as well. Manasā is predominantly based in Bengal, but can also be found in surrounding areas of north, northeastern, and southern India. She is depicted as a woman who is either covered with snakes while sitting on a lotus, or standing on the back of a snake. While seated, she is almost always sheltered by the hoods of seven cobras who line behind her. Occasionally while being invoked for fertility, she is depicted with a child on her lap as well.

Originially, Manasā was exclusively worshipped in local tribes. However, her popularity led to these followers adopting her into their Hindu practices and rituals. After a period of this, the higher classes of India fully absorbed her into the Hindu Pantheon. As a result, she is now regarded as a Hindu deity. Despite this formal connection to Hinduism, she largely remains a village deity. These villagers will worship her throughout the year, and will often perform a variety of songs and dances in her honour. Some villages refer to her as ‘Vishahara’, a deity who is known for curing a variety of poisons.

Her adoption as a Hindu deity led to a formal acknowledgement that her parents were Kashyapa and Kadru, the latter being a deity. This inclusion also led to their being considered as the parents to a further thousand nagas. She is occasionally considered as the daughter of Shiva, while being considered for her fertility aspects. This connection is furthered by several myths stating that she saved Shiva after he accidentally drank poison, as the ‘remover of poison’.

Most myths relating to Manasā portray her as being foul-tempered and unhappy. This appears to be because of her rejection from Shiva as a formal deity, as she is part mortal. Her aim in most of these stories appears to be to fully establish herself as a goddess in her own right, and accumulate her own devout following. She is told as being kind to those who do already worship her, and harsh on all those who do not.

One of the main stories of Manasā can be found in the Mahabharata. This particular story tells of her marriage to Jagatkāru. He had originally chosen to abstain from marriage and female contact, before coming across a group of men hanging from a tree. They told him they were his ancestors who were doomed to misery as their bloodline would end with him. He decided to seek a wife to save them, and Manasā was offered to him by her brother Vasuki, king of the serpents. They had one child together, a son named Astīka. He was a Hindu Rishi or ‘seer’, and foresaw the destruction of all nagas. Takshaka, a great snake, bit King Janamejava’s father which led him on a rampage against all serpents and began a fire sacrifice. Astīka intervened, and saved all nagas from destruction.

Nagini has become forever immortalised in the Harry Potter series by J.K. Rowling, showing her extensive research ahead of the books.