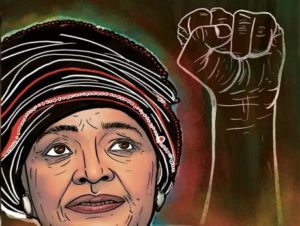 Earlier this year we said goodbye to Winnie Madikizela-Mandela, who died on 2nd April 2018 after a long illness and received a state funeral eight days later. Yet, I found it strange when my news app failed to display any news of her death until a few days afterwards. In fact, there was little mention of the event in the news compared to the passing of Stephen Hawking a few weeks before. This got me thinking why when she was such a key figure in the fight against apartheid in South Africa.

As a young woman, Winnie travelled to Johannesburg where she became the first black female social worker in the city. A lot of her research was into the high infant mortality rate in black townships, which she linked to the extensive poverty caused by racism. The findings of her research are what first ignited her interest in politics.

“I started to realise the abject poverty under which most people were forced to live, the appalling conditions created by the inequalities of the system” – Winnie Madikizela-Mandela

In 1957, Winnie met a rising lawyer and anti-apartheid activist called Nelson Mandela. The couple were married a year later, but it would be a difficult first five years of marriage. Nelson moved underground to lead the armed struggle against apartheid, which ended with lifetime imprisonment for high treason in 1964. This left Winnie alone with two young girls to care for amidst constant hassle from the apartheid police. Many a time, Winnie was dragged from her bed at night without warning, and taken away for questioning. On one occasion in 1969, she was locked in solitary confinement next to a torture chamber for 491 days. The authorities even left her in the cell without sanitary towels when she was on her period. Winnie, known as “Prisoner number 1323/69,” wrote in her diary that the harrowing screams from women on the other side of the wall would never leave her. The diary was later published into a book entitled 491 Days.

Later, when most of the anti-apartheid leaders were in jail or exiled, it was up to Winnie to represent the liberation movement in their absence and lead the fight against apartheid. It was not long before officials banished her in 1977 to a remote town where neighbours were forbidden to speak to her. She was even restricted from meeting with more than one person at a time.

After her husband’s release from jail in 1990, many would turn on Winnie for speaking out and taking over the fight for apartheid. The world punished her far more for her actions and mistakes than her male counterparts were, particularly when Nelson accused her of adultery soon after his release. Many male freedom fighters had sexual relations with women outside of their long-term relationships. Yet, none of them were shamed for their behaviour quite like Winnie.

The years after her husband’s release seemed to mark a slow end for Winnie. In 1991, the South African courts found Winnie guilty of kidnapping and assaulting a young activist named Stompie Seipei following her connection with a notorious group of bodyguards that protected her. A few years later, in 2003, she was convicted of fraud and theft, which seemed the end of her political career. The ordeal saw Winnie resign from both Parliament and her position as president of the ANC Women’s league.

Winnie clearly struggled with post-apartheid politics in a more peaceful time. It was a rare occasion when she attended parliament and she never seemed to enjoy her ministerial duties. This must have been a dramatic change to the discontent Winnie had experienced most of her life. For a long time, her life had involved smuggling guns and other items in and out of South Africa, as well as imprisonment and banishment on many occasions. These bold acts and significant events made Winnie a hero amongst black South Africans. The quiet after the storm was, therefore, hard to adjust to.

The controversial nature of Winnie Madikizela-Mandela’s incredible story seems to have led to her passing go unreported for the most part. In many ways, Gulf News writer Sisonke Msimang was spot on when describing Winnie as a “sort of South African everywoman” who represented the struggles of Black South Africans. However, there was another side to her brought about by the unfairness of apartheid. Winnie was a revolutionary woman fighting for freedom in an unequal world. She was bold enough to raise her voice against apartheid when others were unable to, and it is because of Winnie that the dream of freedom in South Africa remained alive. Yet, for this, she endured punishments that even her male counterparts would not experience.

Please check out the following links for further reading on Winnie Madikizela-Mandela: