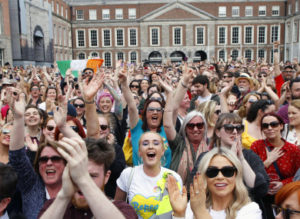 May 25th, 2018 will go down as one of the most significant dates in modern Irish history. On this date, Irish people voted in their droves to repeal the 8th Amendment. This part of the Irish Constitution gave equal rights to the life of the unborn child as it did the mother. There were no exceptions to this, not rape, not incest, not the life of the mother. This did not mean that women did have abortions, they did. They just had to travel to the United Kingdom to get medical care that their own country would not provide.

There have been a number of high profile cases in recent years that encouraged conversations surrounding a traditionally controversial topic in Ireland. The death of Savita Halappanavar in 2012 was the turning point for many people. She was refused an abortion despite suffering from sepsis because a foetal heartbeat was still detected. In another case a pregnant woman was kept on a life support after being declared brain dead by doctors because the foetal heartbeat was still strong. Her family were forced to go to court to have the machines turned off. Families began coming forward to tell of their heartbreak when their unborn child was diagnosed with fatal foetal abnormality. The 8th Amendment meant that despite the fact their child would die at birth or shortly afterwards, they would have to carry the pregnancy to term. Some chose to do this while others made the lonely journey to England. There are so many other stories that weren’t told however, the of the woman who decided that it wasn’t right time to have a child, the teenage girl who was still a child herself or the woman who cannot afford to raise another child. These women are one of over 6,000 women who travelled to England every year to get an abortion. From next year they will no longer have to make this journey. They will now be able to get medical care in their own country, by their own doctor, with the support of their family and friends.

When the exit polls indicated a landslide in favour of the yes side I didn’t believe it. I come from a very rural town in south Ireland and I joked with my friend that our families would be the only ones voting yes. To see the whole country coming together to support women and give them the choice to make decisions about their own bodies was overwhelming. Weeks later it’s still hard to put into words how I feel. The fact that unwed mothers were sent to Magdalene laundries less than 50 years ago, the fact that contraception was illegal until 1980 and that divorce was illegal until 1995 made me sceptical that Ireland was ready to accept change. With the eyes of the world on us, thankfully the Irish population showed that they finally trust women.