Suffrage and Women’s Politics in India 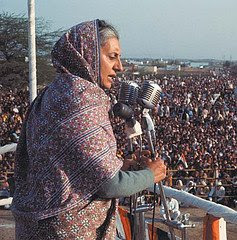 http://creativestuffforu.blogspot.com/2009/04/popular-women-politician-in-indian.html
Women in India have been given the right to vote by the Constitution of India from the moment it came into being since January 26, 1949. It is indeed a matter of great ¬†misfortune that many women do not ¬†exercise this privilege due to ignorance, illiteracy, poverty, and other related factors. On the other hand there is a significant female population which not only votes for their choice of candidate but also actively participates in the day-to-day administrative works of the nation. Post-independent India has seen many female faces in the Lok Sabha, the Lower House of the Indian Parliament, as well as the Rajya Sabha, Upper House. Even the freedom movements of India are incomplete without women participation.
On March 9, 2010, The Women Reservation Bill or The Constitution (108th Amendment) Bill was passed in the Rajya Sabha, according to which women are entitled to reservation of 33% of all the seats in the Upper as well as the Lower House of Parliament, and all the state legislative assemblies in their respective states. In addition to this seats in academic institutions and jobs are also reserved for them.
The Bill was passed amidst great uproar. There were cynics, skeptics, people who swore by it, people who voted against it, and people who chose to be indifferent about it. I may not be the right person to comment critically on it, as only time will tell whether this bill has really benefited the Indian woman or not. All I can say at this juncture is that it is indeed a great step towards women empowerment, provided the Bill is not misused and does not fall into prey of double standards.
-Shruti Gautam
Junior Girl
Girl Museum Inc.
DONATE NOW