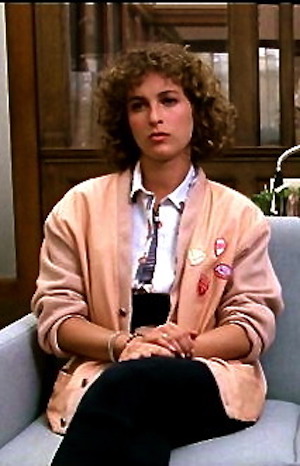 Jennifer Grey as Jeanie Bueller in Ferris Bueller’s Day Off. Fair Use.

Ferris Bueller’s Day Off was written by John Hughes and released in 1986. The movie is set in Chicago and is often referred to as a love letter to the city by Hughes. It follows the titular character as he skips school. He fakes an illness in order to have some fun in the city, and convinces his best friend and girlfriend to join him. What follows is a highly enjoyable day for them and the audience. Full disclosure, this is one of my favourite movies.

Jeanie Bueller
Throughout the movie Jeanie is portrayed (by Jennifer Grey) as the jealous younger sister. She feels that her parents give Ferris preferential treatment and she is sceptical that he is actually sick. She leaves school early as she can no longer handle people’s sympathy for Ferris. Once she gets home and figures out Ferris is in fact faking his illness she thinks she has ammunition to get him in trouble with their parents. The school principal also thinks Ferris is faking so he visits his house; Jeanie thinks that he is an intruder and heads to the police station. Here she meets Garth (played by Charlie Sheen) and she is instantly smitten. He tells her she needs to stop worrying about what people think of Ferris and focus on herself. In the end she covers for Ferris when he is caught by the Principal Rooney.

While Jeannie is meant to be the annoying younger sister who tries to get the hero in trouble, her annoyance is understandable. Ferris is popular in school with everyone and she feels her parents prefer him to her. When you’re a teenager these kind of feelings are completely normal. Most people want to be liked and it’s tough to feel that people like a sibling more than you. It takes Garth telling her to worry about herself and not her brother that she realises that she is responsible for her own happiness. I think her helping Ferris at the end is good progress for her and hopefully a sign that she will focus on herself going forward.

Sloane Peterson
Sloane is what we would describe today as “the cool girl”. Played by Mia Sara, nothing at all seems to bother her throughout the movie. The first thing to note about her is just how cool she looks, she is a beautiful girl, of course, but her outfit just screams cool. She remains calm while talking to the principal about the fake death in her family that allows her to leave school. She has a deep conversation with Cameron which allows him to be more open than he normally would. He feels comfortable enough with her to admit that he can’t handle anything and is somewhat envious of the way Ferris can. While she is a year younger than Ferris she does seem more mature than him. While Ferris only sees the fun in everything they’re doing, she is a bit more cautious and wary of being caught.