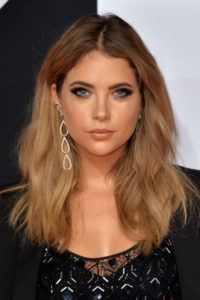 Pretty Little Liars is based on the series of books by Sara Shepard and debuted in 2010. It centres around four teenage friends who are brought back together when the remains of their missing friend are found. The series follows them as they try to solve the mystery of who killed her, all while dealing with the mysterious “A” that torments them throughout the series. The series ran for seven years and the character profiles contain spoilers.

Hanna Marin
When we meet Hanna Marin in Season 1, we learn she is one of the most popular girls at Rosewood High. Alongside her best friend Mona, she is pretty, stylish and a bit of a party girl. Beneath her confident exterior, though, we learn that she is insecure and works very hard to maintain her ‘popular girl’ image. In flashbacks we see Alison was quite cruel to Hanna, calling her “Hefty Hanna” because she was overweight. After Ali disappeared, Hanna completely changed her appearance, losing weight and styling her hair differently.

In Season 1, Hanna suffers physically as a result of ‘A’, ending up with a broken leg after her mystery tormentor hits her with a car. She also suffers emotionally when she finds out Mona was the person who tormented her and her friends. Eventually she is able to forgive Mona for everything she did to them. Of all the girls, she is the one who had the toughest time when Alison returned to Rosewood. She struggled with her identity, changed her hair again, and started drinking with Caleb (her on-again, off-again boyfriend). She also struggled in the aftermath of Mona’s apparent death. Hanna is arrested for her murder but while she is being transferred to prison, she and the other girls are kidnapped by ‘A’. ‘A’ tortured them for a month in her ‘dollhouse’. After being rescued, Hanna suffers from PTSD and became angry as a result of everything that happened to her. After it is revealed that CeCe Drake is the one who had been tormenting them, she moves to New York City with Caleb to study fashion.

Hanna achieves great success in New York, living out her dream by working in the fashion industry. But on her return to Rosewood, the old horrors come back and we see she is still struggling after the years of torment by the many ‘As’. Like the other girls, she finds happiness. In the series finale we find out that she and Caleb are trying for a baby.

While she might seem shallow to people from the outside, we see her softer side when it comes to her mom. Throughout the series, Ashley Marin becomes a target for ‘A’ a number of times. One of those times she is arrested for killing a police officer and Hanna decides to tell the cops that she did it. Ultimately her mother is freed from prison and the real perpetrator is caught.