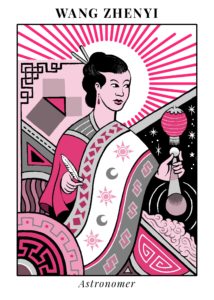 In this column, I’ll be looking at an inspirational girl from every century, starting in the 21st century and working back to the 1st century CE. As a historian and feminist, I thought this was the perfect way to share the stories of awesome historical girls from around the globe. Hopefully you’ll learn about some girls you might not have otherwise heard about, as these Trailblazers deserve to be your next role models!

Although Wang Zhenyi died tragically aged only 29, she was one of the most famous Chinese scientists and scholars from the Qing dynasty, which lasted from 1644 to 1912. I chose Wang as my 18th century trailblazer because she lived a life devoted to learning and produced a nearly inconceivable amount of work from a very young age, achieving more than most people did in their lifetimes!

Wang (1768-1797) was born at a time when feudal customs in China prevented girls from getting an education. Luckily for Wang, she was born into a house of scholars who encouraged and supported her learning. It quickly became evident as a young child that Wang was very clever and she attempted the mean feat of reading every book in her grandfather’s vast library. She didn’t succeed, but she did educate herself in an array of subjects and was educated to a higher standard than many boys in China. She taught herself astronomy, maths, geography and medicine, with some help from her progressive father and grandfather. When Wang was eighteen, she made friends with female scholars in Jiangning and decided to focus her studies more strongly on astronomy and maths – it is in these fields that her greatest scientific contributions came.

With no lab to work in, Wang conducted experiments in her house, trying to work out how the world revolved and whole host of important questions about the universe – and she made quite a lot of headway! In an era when the majority of people thought that an eclipse was a sign of angry gods, Wang Zhenyi wrote a book where she said, ‘Actually, it’s definitely because of the moon.’ And she was right! In countless other published articles, and her 12 published books, Wang explained the number of stars, the revolving direction of the sun, the movements of the moon and planets, and the relationship between lunar eclipses and solar eclipses. She even tried to explain why people couldn’t fall off the earth! She both summarised earlier studies in astronomy and did original research, correcting earlier views and calculations. Wang’s writings and thoughts were revolutionary in China, even more so because they came from a young woman! It wasn’t long before Wang made a name for herself as a first rate scientist. She became a teacher of maths and science and she even took on a few male pupils which was unheard of at the time!

As Wang was self-taught, she knew the importance of having work that was easy to read and wanted to allow all people to access scientific work. So she decided to revise other scientists’ work to make it more understandable – and simplified a few dozen mathematical proofs in the process. By 24, she had published her revised work, The Simple Principles of Calculations. Just another day at the office, really.

Wang was a double-thread of the academic world; she wasn’t just just a scientist, but was a talented poet as well. She protested against widespread sexism in a feudal monarchy through the medium of poetry – and she was actually really good. Her style was unusually direct, often poignantly depicting scenes of wealth and gender inequality in her society. She also exposed the misogynist views of contemporary male academics. Her 13 volumes of poetry were deemed ‘unfeminine’ because of their lack of flowery language, but why use flowery language when you can kick sexist butt with your poems instead?

Apart from being an incredible scientist and role model, she was also just a pretty cool girl. As a young girl, she learnt equestrian skills, archery and martial arts from the wife of a Mongolian general named Aa. Wang later confessed that she liked to ‘practice martial arts while galloping on horseback.’ How’s that for extreme sports?

Although she lived in a feudal society, Wang believed a woman could display her talents to the fullest. She believed knowledge was powerful and ‘what counts is the usefulness, no matter whether it is Chinese or Western.’ This view was not the norm in China at this time, where western knowledge and ideas were often rejected. As a well published and respected female scientist and international thinker, she is both a trailblazer and an inspiration to girls today.