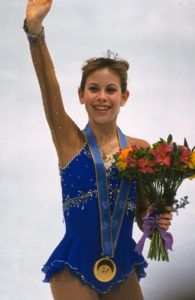 I’ve always loved figure skating. There’s something magical about it; the flowing movements, the twists and turns, the jumps which leave your heart in your mouth. So Tara Lipinski was an easy choice for my 20th century trailblazing girl, as she won an Olympic gold medal for figure skating aged 15 – no big deal right?

However after I made this decision, I realised I’d never actually seen Tara skate! So I watched her Olympic long program; then her short program; then her world championship skate. And I was hypnotised; watching Tara skate brought actual tears to my eyes. On the ice she flew; she glided; she leapt for joy. More than any athlete I’d ever seen, Tara’s love for the sport seeped out of her every movement. With legs shaking with fear, having no idea how to handle the crippling pressure of the Olympics, Tara made the decision to just go out there and enjoy her spotlight on the ice. In the midst of the most pressure an athlete can face, at only 15 years old, Tara didn’t crack, she blossomed and she grinned, a wide toothy smile which seemed so out of place in the serious Olympics arena.

Already blown away by Tara’s talent, the more I read about Tara and her journey, the more I was amazed.  When Tara won an Olympic Gold Medal at the 1998 Winter Games in Nagano, she broke a 70-year-old record to become the youngest athlete to ever win gold in the Winter Games. But this wasn’t even the beginning of Tara’s success – her career, even before the Olympics was littered with ‘firsts’ and being the youngest person to accomplish something. Tara never saw her age as a disadvantage and I love that about her. Just before the Olympics, Tara had become the youngest competitor in history win the World Championships Figure Skating. She was also not only the youngest but the first woman to land a triple loop – triple loop jump combination in competition in 1997 and then the first woman to land two triple-triple jump combinations at the Olympics in 1988 – that was an amazingly bold move.

Having so much professional success and fame so young can do funny things to a person. However, what makes Tara really inspirational is that she really was just an ordinary girl who wanted a normal life. After attaining the biggest achievement for an amateur athlete, Tara then made the controversial move to turn pro. Now if you’re not a big sporting fan, this might not seem like a big deal, but turning pro meant that Tara would never be allowed to compete in the Olympic Games again. This is a big decision for a 15 year old, especially one who brought back the only American female gold medal in the 1998 Olympics. Despite coming up against opposition, Tara was strong enough to make that tough decision for herself. Tara’s family had been apart for 5 years while she trained and she thought it was greedy to force her parents to be apart for another 4 years just so she had a chance at another Olympic medal. In her words, she didn’t want to be 21 and not know her dad.

Despite the controversy, turning professional was just another career move that this young lady aced. She became the youngest competitor to win the World Professional Figure Skating Championships in 1999 at the age of 17 and the youngest-ever inductee into the United States Figure Skating Hall of Fame in 2006. Tara went on to win every competition she entered during her professional career. Now she’s a ‘retired’ figure skater and has turned to commentating and analysing figure skating competitions, including the Olympics. If you want to hear more from Tara herself you can check out her website, Twitter and Instagram.

As if that wasn’t enough, Tara realised very early on that she should give back to the community and be a role model for young women. Tara wanted to show them that you can achieve your dreams and that age should never limit you. Because of this desire, Tara hasn’t seen her Olympic medal in 13 years, letting it be displayed in museums around America so that it can inspire young girls.

So thank you Tara, for showing us all that you are never too young to follow your dreams and that just because no one else has done something, doesn’t mean that you can’t! The figure skating world, and all girls, will be looking to you for inspiration for a long time.