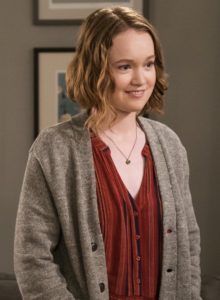 I finished watching (read: binge watching) Santa Clarita Diet this weekend, and had to write about the unsung hero, Abby Hammond.

The new Netflix-original series tells the story of Sheila and Joel Hammond, married realtors raising their teenage daughter Abby in suburban paradise of Santa Clarita, California. Of course, all doesn’t remain simple. Sheila, played by Drew Barrymore, suddenly becomes ill and no longer has a pulse, soon becoming a cannibalistic zombie. The series follows Sheila and her husband Joel, played by Timothy Olyphant, attempting to retain a normal suburban life raising their daughter Abby while also killing ‘bad people’ for Sheila to eat.

While Sheila inevitably is the focal character of the series, Abby Hammond, to me, is the star of the show. She is played by Australian actress Liv Hewson, who also stars in Before I Fall, Dramaworld and season 2 of the Elisabeth Moss series Top of the Lake, with Gwendoline Christie and Nicole Kidman. 16-year-old Abby Hammond is portrayed as an archetypal moody teenager, manipulating her mother’s newfound vivacious energy for rebellion (which is a screamingly obvious metaphor for suburban boredom and mid-life crises, but that’s a whole other review). Abby’s character, at times, does fall into this outdated stereotype. In one episode “Man Eats Men,” she attempts to steal her dad’s motorbike only to find a dead body, her mom’s lunch, in the storage unit. She unbelievably consistently finds herself in potentially dangerous situations, even going to a stranger’s house whom she met on Craigslist to collect his bile that is needed to treat Sheila.

However, as the seasons progress, and as she begins to understand her mother’s new undead life, her character develops into a nuanced and complex representation of the reality of a female teen — ‘reality’ aside from the zombie parent, that is. Abby is darkly funny and sarcastic, finding the humour in the absurdity of their new family dynamic. Despite, perhaps even because of, the occasional rebellion, Abby’s character development is endearing to watch. By the second season, Abby has grown to become activist, in a way. She takes on a misognynistic bully at her school, hitting him with a lunch tray as retaliation of him sharing his girlfriend’s private messages, a drama which she considers a vacation from her dramatic life at home. She even protests fracking after joining an environmental club as punishment for the lunch tray incident, making her own explosives to blow up a newly built fracking site in Santa Clarita.

Abby Hammond is the unlikely role model for young girls. In an interview with actress Liv Hewson for Bustle she said, “The journey Abby goes through, it’s one that I remember going through and I think a lot of young people can relate to, she is just trying to assert herself as an individual in a world that she doesn’t really understand yet. And I think for teenagers, that’ll happen to you at some point no matter what’s going on.” She becomes brave, confident, and self-assured – somehow able to take on whatever situation is thrown at her.

The only other character outside of the family aware of Sheila Hammond’s illness/zombiehood/however you’d like to phrase it, is their next-door neighbor Eric, played by Skyler Gisondo. Another archetype to be slightly overplayed in Santa Clarita Diet is the will-they-won’t-they relationship between ‘the boy next door’ Eric and Abby. He is in love with her, almost to the extent that she becomes his Manic Pixie Dream Girl. That said, Santa Clarita Diet continues to focus on Abby’s attributes and strengths as an individual, rather than as a counterpart to Eric’s affection for her.

Despite some negative reviews, of which there are many, I loved Santa Clarita Diet. The series is undeniably poorly executed, with the same jokes repeated and the silly humour turning alternating between charmingly amusing to fatuously slapstick. So, perhaps it should fall under the category of ‘guilty pleasure’ watching, but I’m not guilty; Santa Clarita Diet is fun, endearing, and wholly addictive.