Drug addiction in girls on the rise globally 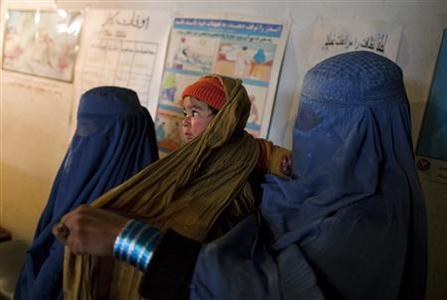 A female addict and her son at the U.N. funded Nejat drug rehabilitation center in the old quarter of Kabul.
http://www.reuters.com/article/2012/04/01/us-afghanistan-women-drugs-idUSBRE83001H20120401
The primary factors that make girls vulnerable to substance abuse include low self-esteem, peer pressure and depression, all of which motivates girls to alleviate negative mood, increase confidence, reduce tension, cope with problems, lose inhibitions, enhance sex, or lose weight by using drugs and/or alcohol. A 2002 study found that girls as young as 12 who have low self-esteem, are nearly 2-5 times more likely to engage in heavy alcohol use at age 15 as opposed to those with higher self-esteem. This relationship wasn’t found in boys. Apart from being more likely to begin abusing substances earlier than boys, once girls use harmful substances, they become more dependent upon them than boys. Peer pressure is associated more strongly with drinking for girls than it is for boys. Whilst the relationship between peer pressure and alcohol was not found for boys, girls who report high levels of peer pressure to drink are twice as likely to use alcohol, compared to those who report less peer pressure. This is increased when many of the girl’s girlfriends choose to smoke or drink. Among 8th and 10th graders, girls drink more than their male counterparts, and are also more likely to use inhalants and stimulants than boys. Strong family bonds are linked to lower substance abuse for all young people, whilst low parental attachment is correlated more highly with smoking, drinking and drug use among girls than among boys. When parents fail to monitor their children’s activities, girls can become at risk of substance abuse, as well as an unstructured home environment.
It’s important to stop substance abuse in young girls whilst they are still young. Substance abuse exists as a complex brain disease which originates in adolescence, and adolescence is the critical period for the initiation of substance use. There are enormous and costly health and social consequences of teen substance use. This has been noted in the¬†National Center on Addiction and Substance Abuse (CASA) “Women Under the Influence”¬†study, which declares that teen smoking, drinking, misusing prescription drugs, and using illegal drugs has become an epidemic public health problem.
The underlying biological mechanisms are not identical in males and females. Studies on animals show fundamental gender differences in the reinforcing and stimulus properties of abused drugs. The progression of drug involvement is different for men and women. Women are more likely to begin or maintain cocaine use in order to develop more intimate relationships, while men are more likely to use the drug with male friends in relation to the drug trade. The onset of drug abuse is later for girls than boys, and the causes of female drug abuse often lie in predisposing psychiatric disorders prior to abusing drugs. There is a pattern of breakdown of individual, familial, and environmental protective factors and an increase in childhood fears, anxieties, phobias, and failed relationships in females. The relationship between substance abuse and other psychiatric disorders is relatively high for females.
Unable to cope with constantly fighting parents, a 15-year-old girl began sniffing whitener as an escape from reality, and her addiction caused her to start neglecting her studies. Even in more conservative parts of the world, female drug addiction is on the rise, such as in Afghanistan and Pakistan. Afghanistan produces more than 90% of the world’s opium, which is used to make heroin. Like many of Afghanistan’s female drug users, Anita picked up the habit from her husband, and is now afraid to nurse her newborn son, for fear that he’ll become addicted as well. Due to the stigma attached to drug use, female drug users are hardly ever mentioned in Afghanistan. A Kashmiri news story by Dr. Arif Maghribi found that Kashmiri women took nicotine by puffing hookah which was prescribed by hakeem sahibs (a sort of tribal doctor in Pakistan), and this continued until the uprising in 1990. Following this, there was a change in pattern of addiction for females. Local chemists are now required by law to keep a record of all patients receiving sleep inducing medicine and medicine containing medicinal opiates. Problems surrounding young girls in Kashmir today are often “removed” by taking sleeping pills. Drug use has recently increased among school and college girls.
A period of about one month allows the substance abuser to undergo¬†counselling,¬†de-addiction, and¬†psychological recovery, all of which are part of the process of detoxification. Once completed discharged, substance abusers are encouraged to go to their families and work places and regain their normal, healthy lives. With effective implementation of the necessary factors, we can help to solve female drug abuse. By highlighting the many reasons to quit drugs to young girls and women, girls worldwide will be able to recover from addiction and have the chance for a better future.
-Ayesha Khalid
Junior Girl
Girl Museum Inc.