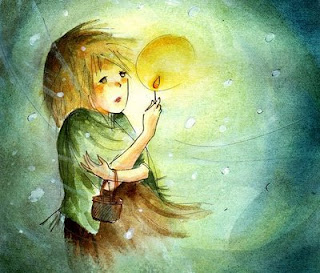 The Little Match Girl, from the homonymous story by Danish author Hans Christian Andersen.
http://3.bp.blogspot.com/_8k2444DqkLk/TQTqrXlW23I/AAAAAAAAAM4/y_ScMfbmhUs/s320/to-koritsaki-me-ta-spirta.jpg
The European continent recently welcomed the New Year with rather ominous black clouds, under a deep and longterm recession. In many cases, such as countries with preexistent ailing economies, this resulted in grave social problems being magnified right in front of our eyes.
The unemployment rates are rising in Spain, Portugal, Ireland, Italy, Greece, and if that wasn’t enough, it looks like economic cutbacks in both wages and social welfare are also here to stay. The burden of this development is often too much to handle mainly for families, thus turning homelessness and abandoned children into the new age phenomena. Greece‚Äôs abrupt rise in people living on the streets is remarkable and indicative of the seriousness of the times.
Stories like this one of little Anna, others regarding young pupils who faint at school due to starvation and their teachers trying to ensure for them portions from the communal meals or news like this are revealed far too often. It‚Äôs tormenting enough for anyone to imagine the elderly and adults striving under such difficulties, much more when children are involved. Especially these last days, when the whole of Europe is experiencing a freezing cold winter, it’s at least comforting to see that private initiative is activated anew in multiple ways, for example giving away supplies in local community centers or on the spot and volunteering in relevant groups of action like Boroume.
For many young girls, instead of mentally travelling in fairylands and other fantasy places with enchanting creatures, they end up as if they were the leading character in Hans Christian Andersen‚Äôs story The Little Match Girl. The real notion from this beautiful tale is surprisingly optimistic, since in a life of absolute poverty and hardship a girl never stops dreaming.
So, my first and warmest thoughts from this stand are addressed to all these girls – fighters. May they come out of this misfortune stronger and full of hope.
-Magda Repouskou
Junior Girl
Girl Museum Inc.