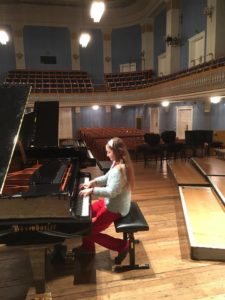 Over the last year, our own Junior Girl Tia Shah, has been writing an amazing column about trailblazing girls throughout history. This new Incredible Girls column is in that vein, only this column is about contemporary girls under the age of 25 who are doing awe-inspiring and significant things in the world. Every Friday in 2019, we are going to post a column detailing the life of an Incredible Girl and why you should know about her. Read on for a glimpse into the life of the remarkable composer, Alma Deutscher.

13-year-old Alma Elizabeth Deutscher is a composer, violinist and pianist. She composed her first piano sonata at the age of six. By the age of ten, she had written her first major opera and a concerto for violin and orchestra. Alma was born in England, and her parents, Janie and Guy, are a literature professor and a linguist respectively. Both of her parents are musicians, although not professionally, and have always supported their daughter’s love of music.

Alma started playing the piano when she was two years old and began playing the violin when she was three. At the age of 12, she completed her first piano concerto, which premiered in Vienna. Also around this time, she composed a full length opera, Cinderella, which has been performed around the world.

According to her website, she has performed as a soloist on the violin and piano all around the world — in England, Germany, Austria, Switzerland, France, Uruguay, Spain, the United States, Canada, Israel, Japan and China. She started writing music at age four and began taking piano and violin lessons around the same time; she had gotten a toy violin for her third birthday, and all of the adults assumed she would get bored with the toy and cast it aside, but she never stopped playing.

In her first complete opera, “The Sweeper of Dreams,” based on a Neil Gaiman story, the lead is a 16-year-old girl who overcomes adversity to become a Sweeper of Dreams. Her more recent opera, Cinderella, has Cinderella as a composer, and the Prince as a poet. Music is central to Cinderella, and the Evil Stepmother owns an opera production company where much of the action takes place.

In interviews, Alma has pointed to her purple jump rope as one of the things that gets her creative juices flowing, and really helps to channel her inspirations onto paper and via an instrument. Melodies and fully formed ideas for compositions also come to her in dreams. She has been compared to Mozart, but Alma says that she doesn’t “really want to be a little Mozart because then I would just compose what he has composed already. That would be boring. I want to be Alma, a little Alma.”

I first heard of Alma on the American weekly news program, 60 Minutes, and was absolutely gobsmacked. The sheer wonder, joy and musical talent that she brings into the world is just delightful. She is a true Incredible Girl and I very much look forward to seeing where her career goes from here.