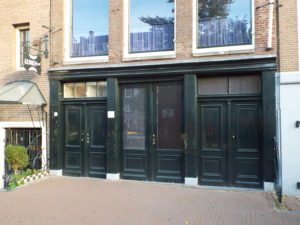 No. 263 Prinsen Gracht is where Anne Frank and seven others hid from Nazi occupation about 76 years years ago. Today, the building is the home to the Anne Frank Huis museum. Photo Credit: Claire Amundson

The centenary of Armistice Day last year has been a time for reflection. We have all taken a moment to remember all those men, women, and children who lost their lives in the Great War just over 100 years ago. As I sit at home in silence, I’m reminded of a recent visit to the Anne Frank Huis in Amsterdam. I start thinking about a second world conflict that broke out only 21 years after 1918 and the heroic little girl who spent more than two years in hiding from German occupation. The trip to 263 Prinsen Gracht in early October of last year was emotional, and one I will remember for a long time.

We arrived at one of many narrow houses stood a few metres away from the canal running through the entire city. Our tour guide stopped and on the other side of the road was the house where Anne and seven others called home during the war. This is where Anne wrote her famous diaries and describes life in the Secret Annex.

Anne received a diary for her 13th birthday shortly before the family went into hiding on the 6th July 1942. The diary would be her closest friend from this moment on until the Secret Annex was raided in August 1944. Walking through the house, I felt as though I had been transported back in time. The wallpaper was the same and Anne’s pictures of film stars, princes, and princesses taken from magazines were still pasted on the walls, which she had done to make the room more cheerful. Even the floorboards still creaked when walking through the room Otto, Edith, and later Margot Frank slept. It occurred to me how loud the sound was as I followed the line of visitors around the outside of the room. I suddenly realised how difficult it would have been for the family to move around. Only by walking in the very centre of the room did the creaking sound stop. You then had the strict rules to follow when using the washroom in the next room over. Anne herself wrote that there was “[n]o running water, no flushing toilet, no walking around, no noise whatsoever” from 8:30am to 5:30pm, when the warehouse workers left to go home.

The safest place to spend the day was the living/kitchen room, and I could instantly see why. It was the largest of the five rooms and furthest away from the offices, the storage areas for Otto’s business, and the busy warehouse on the ground floor. We moved from the living/kitchen area to a small room with a ladder. This was where Anne would “go up to the attic almost every morning to blow the musty air from the room out of [her] lungs.” Looking up, a mirror gave us a glimpse into the attic space at the top of the building. A feeling of sadness washed over you at this point as you realise how Anne’s dream of becoming a writer has come about.

After leaving the Secret Annex, the museum continued and we finally came face to face with the famous words themselves. There, on display in front of me, was the original diary from 12th June – 5th December 1942 with the familiar checked cover. Sat in display cases at the end of the room were Anne’s notebook of “beautiful sentences” and short stories. It was fascinating to see the writings of this incredible young girl with her corrections and the loose sheets of coloured paper where Anne had rewritten some of her diary with the intention of publishing them when the war ended.

Sadly, Anne did not get the chance to see how others reacted to her writing. Investigators raided 263 Prinsen Gracht premises on 4 August 1944 and discovered those in hiding.  Anne and her family passed from the security service headquarters to Westerbork transit camp before they were deported to Auschwitz. Sometime later, Anne and her sister were taken to Bergen-Belsen concentration camp where they both died only months before Allied forces liberated the camp. It is an incredible story, and you cannot help coming out of Anne Frank Huis without a sense of sadness and realisation. A few weeks on, and I’m still looking back on what was a powerful visit.

Please visit https://web.annefrank.org/en/Subsites/Home/ for a virtual tour of the Secret Annex where Anne spent more than two years in hiding during World War II.

To learn more about what wrote Anne wrote about in her diaries, please visit http://diary.annefrank.org/ for more.