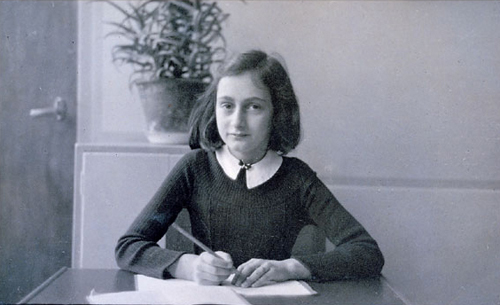 Born in Germany in 1929, Anne Frank’s family was Jewish. Her first decade witnessed the rise of the Nazi party, which grew to power by blaming Jews (and others) for Germany’s post-World War I problems. High unemployment and poverty were severe, making Adolf Hitler’s sentiments seem like the magical solution that Germany needed. Hitler hated Jews, and blamed them for the country’s problems. He wanted to get rid of them, and accomplished this by encouraging boycotts of Jewish business and the liberal professions, as well as passing anti-Semitic laws. Among these laws were teh “Nuremberg Race Laws,” which excluded Jews from German citizenship and, instead, labeled them as “German subjects.”

In response, Anne and her family moved to Amsterdam, where her father founded his own company. They were among the 130,000 Jews who left Germany in the 1930s. Anne was now a refugee.

The family – like many Jews – was unable to emigrate further due to restrictive laws in other countries about refugees, which were considered a problem, as well as discriminatory views about Jews. Many countries limited the number of Jewish refugees they would accept, and some countries – like Britain – prioritized transporting children only. Another problem was that the Germans had stripped Jews of their valid passports, effectively terminating their nationality as German citizens; without these passports, Jews were unable to get the right papers to emigrate to countries like the United States. Then, in 1941, all the embassies and consulates of the US in occupied Europe closed, making emigration to the US only possible if a family could reach the consuls in Spain, Portugal, or unoccupied France. This was further complicated by the attack on Pearl Harbor, which severely limited the number of passenger ships sailing from Europe to the United States.

By all accounts, Anne’s life in Amsterdam was pleasant. She learned Dutch and made many friends at her school.

Yet at age ten, everything changed. Anne watched in horror as Nazi Germany invaded Poland and World War II began. Within a year, the Nazis invaded the Netherlands – including Amsterdam – and began introducing laws and regulations that made life hard for Jews. Anne could no longer visit parks, cinemas, or non-Jewish shops. Her father lost his company, as the new laws prevented Jews from owning their own businesses. Anne was forced to leave her Dutch school and attend one exclusively for Jews.

Soon, Anne – like all Jews – was forced to wear a Star of David patch on her clothes. Rumors were flying about the fate of the Jews. Two years after the invasion, on July 5, 1942, Anne’s sister received instructions to report to a “labor camp” in Nazi Germany. Suspicious of the camps, Anne’s parents decided to put the family in hiding. They moved into a secret annex that her father and his former colleagues had been furnishing at Prinsengracht 263. Food and supplies were brought in by her father’s friends and colleagues.

Anne’s situation was not unique. Many people went into hiding during the war. According to the Anne Frank House, up to 330,000 people were in hiding in the Netherlands, including 28,000 Jews. One key difference was that Anne’s family was well prepared to go into hiding, and had a team of five helpers with sufficient financial support. Many others went into hiding at the last minute, taking only what they could carry and hoping for help. This was partly because the Jewish Council was against people going into hiding, since not everyone could do so and it would mean families could be separated. Another reason was that those in hiding didn’t know their true fate — the Nazis only claimed they were sending Jews to “labor camps” and it would be months, perhaps years, before people started figuring out there were gas chambers as well.

The secret annex was small and cramped, and Anne was forced to be as quiet as possible. Just before retreating to the annex, on her 13th birthday, Anne was given a diary. During the next two years, she wrote about the events in their small hideout, her feelings, and her thoughts. She also wrote short stories and began work on a novel, in order to pass the time.

There are three diaries from Anne’s time in the annex, the first ending on December 5, 1942. The second spans December 22, 1943 to April 17, 1944, while the third and final diary spans April 17 to August 1, 1944. The intervening year of 1943 was likely in another book, but we only have a copy of the entries that Anne produced using carbon copy paper. It is known that Anne rewrote entries as she put them onto carbon copy paper, so while the 1943 copies tell us about her life, they are known to have been edited by Anne. Throughout her time, she intended to publish the diaries once the war was over.

Additionally, the diaries are problematic because Anne’s father – who published the diaries – intentionally left out some sections, moved others, or made corrections. It was not until 1986, after her father’s death, that Anne’s original diary entries were published in their entirety.

During Anne’s years in the annex, her diary relates various events and the conditions of her life in hiding. A week after moving in, the Franks were joined by the Van Pels, and later by Fritz Pfeffer. The annex was accessed on the third floor of the house, behind a bookcase. The Franks lived on the third floor, with the Van Pels above. Fritz shared Anne’s room, though they did not get along well given their huge age difference. They fought over the writing desk, which Fritz wanted for prolonged study of other languages while Anne wanted space to write in her diary. Anne’s father eventually intervened to ensure Anne was given time to write.

The families frequently gathered in the kitchen, which also served as the Van Pels’ bedroom. They had a small radio, which they listened to when it was safe. There was also an attic, where they stored food and hung laundry to dry. Anne frequently went to the attic to be alone or talk with Peter Van Pels. As she wrote in her diary in 1944 of the single attic window, “As long as this still exists, I cannot be sad.”

Despite the supposed safety, Anne constantly heard the air-raid alarms, sounds of German artillery and bombings. She often didn’t sleep, remaining frightened and worried of their discovery. As she wrote on June 2, 1944, two years  after going into hiding, she finally found a way to deal with the fear by running up and down the stairs, intentionally falling at least once, to become “too preoccupied to hear the shooting”.

Anne’s diary reveals a rich inner world among the hardships of life in hiding. In it, she wrote to several imaginary friends, who formed a circle of friends that she imagined could correspond with her. Kitty was her favorite, with most of the diary entries addressed to her, and was based on the character of the popular Joop ter Hell book series.

Anne kept her diary until the family was discovered by the Nazis on August 4, 1944. To this day, the reason for the police raid remains unknown.

After the families were taken to concentration camps, two of the people who had helped hide them discovered Anne’s diaries. They took it and other documents into hiding.

Anne and her family were sent to Auschwitz, a three-day cramped train ride away. Anne, her sister, and her mother became laborers, separated from their father. Just two months later, Anne and her sister were taken to Bergen-Belsen, while their parents remained at Auschwitz. The terrible conditions of Bergen-Belsen, lack of food, and wintry weather led the sisters to contract typhus. They both died in February 1945.

Anne’s father was the only survivor from the Secret Annex. After the war, he was given Anne’s diaries—which made a deep impression on him in his grief. In June 1947, he published her diary as “The Secret Annex” – from its initial print run of 3,000, the book went on to be translated into 70 languages and adapted for the stage and screen.

Today, the Secret Annex is part of the Anne Frank House museum, which opened in 1960 as a place to discover Anne’s story and discuss the dangers of discrimination, racism, and hatred of Jews.

Thanks to her diary, Anne is an international icon, and her diary is one of the most-read books in the world. According to Jeffrey Shandler, this is due to the diary’s quick publication following the war and, by the 1950s, editions for Broadway. It is also due to Anne’s father, whose dedication to her memory was rooted in a lifelong commitment to advocating for human rights and an understanding that the Jewish experience during the Holocaust was symbolic of the potential destruction of entire ethnicities, races, or religions based on hate and fear.

As the Anne Frank House states, “Both Anne and her father understood Jewishness not as inimical to universalism but rather as being realized in its embrace. Thus, Otto envisioned the Anne Frank House as both a site of Holocaust remembrance and an educational institution, where ‘young people of all nations… could seek ways to work for peace.’”

Most importantly, Anne is a primary way in which we — personally, nationally, and internationally – have grappled with the significance of the Holocaust and the writings of girls. Her diaries show a complexity unexpected of girls throughout history, and an intimate understanding of the ways in which girls deal with trauma and violence.

This is especially true for children who lived through the Holocaust, and those who were in hiding. Despite our tendency to highlight the good parts of Anne’s life in the secret annex, her experiences mirrored those of other Jews. As the Anne Frank House states,

“Many people in hiding went hungry, as did the residents of the Secret Annex, who were faced with scarce supplies and a lack of food, particularly during the last years of the war. In addition, hiding could be mentally exhausting. Monotony and boredom were always lying in wait, as was loneliness. […] Many children who were in hiding during the war continued to be plagued by these feelings afterwards. But above all, there was one emotion which dominated the lives of everyone in hiding – the enormous fear of being discovered.”

Anne’s diary provides us these glimpses into life during war, as a refugee in hiding. She is simultaneously an example, an icon, and an inspiration, whose writings ask us to reconsider the place of girls in history, their perspectives on the events through which they lived, and the legacies of their lives in asking us to make the world a better place.