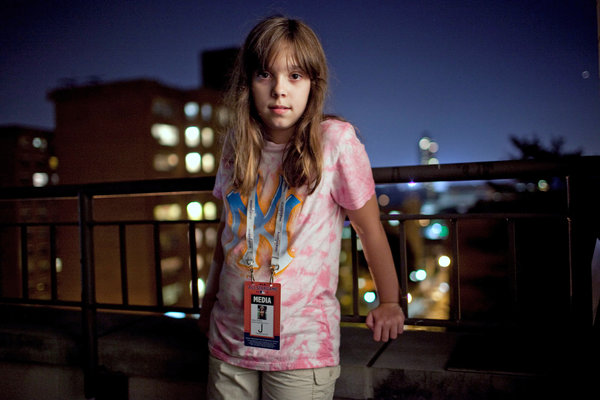 Fans of Major League Baseball (or MLB) are now wrapped up in the excitement of the MLB postseason tournament.

One of those passionate fans is 12-year old Haley Smilow. She loves the Yankees, and she aspires to visit all 30 MLB stadiums. So far, she and her family have already traveled to 22.

However, the seventh-grader is not only visiting stadiums as a fan, she is also a sports reporter who has landed interviews with over 20 Major League Baseball Players. Haley had her first interview in 2011 with Yankees outfielder Curtis Granderson. According to a recent article on Haley in The New York Times,¬†Haley waited for her first interview ‚Äúfor 90 minutes in sweltering heat in the Yankees dugout. . . ‚ÄúShe was a natural,‚Äù her father said, ‚Äúand after Granderson, she just caught the bug and she realized a child could be a journalist.‚Äù Haley and her parents say that the process of researching, writing, and editing her interviews has also helped her with her dyslexia.

Haley is part of the Sports Illustrated Kids Reporter Class of 2013 and she also writes for MLblogs, MLB Reports, and Baseball Youth Magazine, among other outlets.

In an interview this month with Only A Game,¬†Haley advised aspiring sports journalists, ‚ÄúStay confident in yourself. Think about what you can do and don‚Äôt give up and say ‚ÄòI quit‚Äô or ‚Äòthis is too hard.‚Äô I know it‚Äôs a lot of extra work but it does pay off and it is a fun thing to do.‚Äù