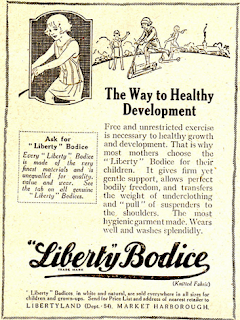 1925 advertisment for the Liberty Bodice
Image courtesy of¬†Flickr¬†User Louise
http://www.flickr.com/photos/catwalkcreative/5859624068/
http://www.catwalkcreativevintage.co.uk
As much as I love period dramas, I sometimes think that being a woman in Victorian England would have been, well, mildly perilous. Being a child certainly seems to have been a time that could be fraught with dangers: sickness, being forced to work in inhumane conditions in factories or up chimneys, and, perhaps the least of these concerns, having to wear a corset and huge hooped skirt.
Although I do like the look of Victorian dress, I’m very grateful I don’t have to wear clothes like that all the time. I rather like being able to breathe without restrictions and fainting is just no fun. I’m especially glad that I didn’t have to wear those clothes as a girl.
Until the late 19th century, however, little girls would have been dressed much like their mothers, wearing corded bands from infancy to “train” their growing bodies into a good posture. From as early as ten, girls would begin wearing shaped bodices as a kind of preparation for a full corset.
So what changed? Well, it seems that the idea of allowing your child to play and be active became more popular and it was nearly impossible for them to do so whilst bound up in their clothes. Manufacturers soon caught on to the changing mood, and thus the Liberty Bodice was created.
By today’s standards, the Liberty Bodice was far from liberating. It was a fleecy knitted vest with rubber buttons, re-enforced cotton tapes, and buttons to attach to drawers and stockings. The rubber buttons could become increasingly difficult to do up as they hardened over time, the bands could feel restrictive, and attaching the bodice to stockings could leave the wearer feeling as though they had been mummified.
Still, it was clearly much better than what has come before. Although changes in clothing styles may seem shallow, they can actually represent greater societal change. The move to free children from restrictive clothing represented the move to start regarding childhood as separate and distinct from adulthood.
As adults we may wear uncomfortable clothing for a variety of reasons‚Äìfashion, work, etc.‚Äìbut the clothing we give to children is generally comfortable, easy to put on and clean. We want to give our children space to grow, both literally and figuratively. That is definitely a reason to be glad to be born now, and not a century ago.
-Sarah Jackson
Junior Girl
Girl Museum Inc.