For those of you who haven’t heard of Poorna Malavath, Poorna is the youngest girl to have summited Mount Everest, on 25th May 2014, at the age of 13 years and 11 months! Her story is a monumental tale of empowerment and endurance, and at its core, a story of survival. On the off chance you’re not already intrigued, I would also like to add that Poorna hadn’t even seen a mountain until eight months before her summit of the tallest mountain in the world. 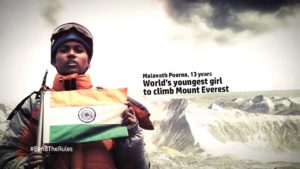 Poorna was raised in a poor rural village in India, where the nearest shop is 7km (about 4 miles) away. Where Poorna lived, many schools in the area refused to teach girls and those who did have access to an education often dropped out early to get married. Luckily, Poorna was accepted into a social welfare school where the secretary of her school, Dr. Kumar, decided to send Poorna on a mountaineering course with other promising athletic students. That was the start of a life-changing journey.

Despite having no previous experience of mountaineering, she took to it like a mountain goat to a cliff face. After successfully climbing the Bhongir Rock, Poorna was sent for a 20-day course at the Himalayan Mountaineering Institute in Darjeeling. Next, she went to Ladakh, a mountainous region in the north of India, where temperatures went down to -30 degrees Celsius (-22 degrees Fahrenheit). The cold was like nothing Poorna had ever experienced before, yet she not only survived but she thrived. When the students returned, Kumar decided that they had to attempt Everest. Now why this was the logical step, I don’t know, but Poorna never questioned this logic and said yes to Everest.

While most people would have been afraid, Poorna just kept saying yes, without fear, without the possibility in her mind that she might not be able to complete the task, that she might not survive. For me, this makes her a true inspiration. But if you’re still not convinced, Poorna’s reasons for climbing Mount Everest will sway you, trust me:

“As I was growing up, I would hear people around me talking about how girls can’t do this or that. I would always stay quiet on hearing this,” she said. “I wanted to prove that girls could do anything, that social welfare students could do anything.”

The first time Poorna saw Mount Everest, she turned to her coach and said cheerfully, “It’s not that tall. We can climb it in a day.” So it didn’t take a day, it took 52 days, but Poorna took step after step, never faltering until she had climbed the world’s tallest mountain. Poorna showed the world that there was nothing a girl couldn’t do. After only 8 months of training, Poorna became the youngest girl to reach the top of the world, also known as the summit of Mount Everest. She was only a month older than the youngest person to ever have summited Everest.

Poorna has a strength of mind and spirit so rare that it leaves me in awe. She was completely fearless in setting her sights on one of the hardest physical feats in the world, and a very dangerous one, and she never doubted she could do it. In a world full of doubt and scepticism, Poorna never lost confidence in herself. Not when the age bar of 16 in Nepal meant she had to do the Everest climb through China; not at Everest Base Camp when she learnt of an avalanche that had just killed 17 experienced climbers on the mountain; and not even on the final stretch of her ascent, where she saw corpses blocking her path, because at that height, no one had the strength or necessary equipment to take them home.

The consequences of Poorna’s achievement are so huge that it has been dubbed the “Poorna effect.” In India, there has been a reduction in child brides, with more girls going into higher education and careers. Boys and girls across India are saying they want to be a “Poorna” in their own fields. She surpassed misogyny, patriarchy, orthodoxy and poverty to inspire a world full of wide eyed girls (and boys!) who now believe that they can truly conquer every mountain in their way.

Now aged 17, Poorna has completed three of seven of the highest peaks in each continent.

So watch out world, Poorna is coming for you and nothing is going to stop her.