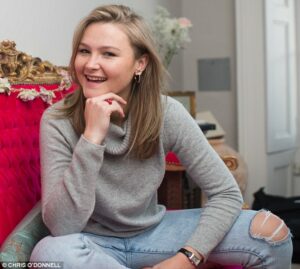 Our story begins in Hong Kong where Amber was born in 1991, before returning to the United Kingdom. During her school years, she became involved with coding at the age of 9; a skill that would later serve her well.  She also got an early start on practicing her entrepreneurship by selling CD’s, cuddly toys and books at her primary school and online.

Her parents nurtured her entrepreneurial spirit, giving her so-called ‘power books’ like Rich Dad Poor Dad by Robert Kiyosaki. Additionally, around the same time, Amber’s mother launched her own skin-care cream line for women over 50, taking an online degree in science. They also encouraged Amber to try new things, such as modelling, which Amber credits as giving her confidence.

By 16, our leading lady was buying jewellery from Asia and selling it to her peers at break time.  Eventually she decided to sell online as part of her blog. In a 2015 interview with Glamour magazine she credits the Scissor Sisters’s song Filthy Gorgeous and studying paradoxes in GCSE English as influences for her business name: Flash Trash.  Her brand quickly attracted investors in order to develop her own line of jewelry, including Lion Capital founders Lyndon Lee and Robert Darwent. Soon after, things went “mental,” as she stated, when celebrities began buying from her site; one notable celebrity was Eleanor Calder, a former girlfriend of One Direction’s Louis Tomlinson. Another factor in her success was empowering her customers to become content creators, dubbed the ‘charm gang,’ who become repeat customers and help spread the word on the brand. The jewellery has been worn by stars including Rihanna, Cara Delevigne and even HRH Duchess of Cambridge. Amber sold the company in 2016 for an astonishing estimated £2 million.

In 2011, at 20 years old Amber co-founded and starred in the reality show Made in Chelsea, a scripted reality show whose first episode opened with a launch party for Amber’s website. The show not only gave her a fan-following but also pushed her jewellery line into the spot-light. As Amber stated in an interview with Fashionist, “It was also super fun, so it definitely got the word out there to an international, viral audience. There’s nothing that can compare to the kind of traffic that TV can bring you, so it was really cool to use Chelsea as a way to get Flash Trash out there.” That same year, Amber was listed as the “5th-Most Powerful Person in Digital Fashion” by British Vogue.

Amber left Made in Chelsea in mid-2012 to focus solely on her business, which then received an angel investor to help it grow. With the investment, Amber was able to redesign her website and launch a self-designed jewlery line called Flash Trash Girl. The brand quickly expanded to be carried in retail stories. Despite its popularity, Amber continued with her original model of selecting designs based on the latest trends and pieces that start conversations on blogs or within her circle of friends.

In 2016, she featured in the Forbes 30 Under 30. By 2017, the then 26 year-old, closed with $1 million ( £750,000) seed money to grow her business by allowing big brand names such as Walgreens, Sony, and Estee Lauder to identify their top 1% of their online following and offer them the opportunity to become brand ambassadors expanding her business even further. That same year, Amber sold her brand to NFTT, a Hong Kong based group that manufactures jewelry, in order to better integrate with supply chains. Amber retained creative and marketing control of the brand, while also acquiring capital to run a new venture, Brand Fan Girl.

Amber pushed the boundaries of business even further when she founded Zyper, an advertising technology start up company that uses a visual recognition app Rubric designed to “solve the millennial epidemic of deciding what to caption a photo”. Using savvy visual recognition technology, the software is able to understand what an image consists of and then suggest relevant captions. The user is then provided with three options: music lyrics, a quote or a “trending phrase” to use as a caption. Zyper eventually expanded into a community marketing platform, helping brands find “super fans,” launch private communities, and focus on engagement, through the help of variou seed funding initiatives and expansions from London to San Francisco and New York City.

Amber has also become involved with getting children of all ages interested in entrepreneurship by becoming a “Business buddy” on BBC’s Young Dragon’s Den, Pocket Money Pitch and judging in the UK”s National Enterprise Challenge.

Today, Amber remains CEO and Founder of Zyper, having closed My Flash Trash shortly after it sold to NFTT.