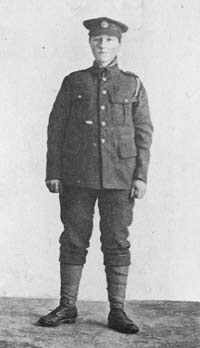 In 1915 an English journalist, Dorothy Lawrence (1896-1964) was biking through France. She cycled to Creil, a French base camp, to report on World War I (1914-1918). Dorothy went to France to “see what an ordinary English girl without credentials or money, can accomplish…[as] a war-correspondent.” In this quest, Dorothy would become a soldier in the war.

World War I caused great destruction. In World War I, France fought for the Allied Powers against the Central Powers. When the Central Powers invaded France, trench warfare defined the landscape. Trenches were long ditches meant to keep soldiers safe from chemical warfare and new artillery in the war. Instead of keeping soldiers safe, trench warfare gave way to mass casualties.

Dorothy documents a firsthand account of the indiscriminate damage from World War I through her travels. In Creil, she first encounters a marketplace that gives the illusion of normalcy, but when she turns the corner, everything is in ruins. The town of Creil is north of Paris, connected by the railroad. Once the sight of a royal castle, Creil was once known for its porcelain factories. In 1915, while Dorothy was in Creil, French soldiers lived throughout Creil. Many more soldiers passed through the town on their way to the front. Determined by her quest to report on the war, Dorothy follows these soldiers to the front.

The front is where fighting occurred. In long trenches stretched across the countryside, the Allied Powers and Central Powers attempted offenses and counterattacks. Yet, these attacks often brought little to no change in territory lost or gained. However, for Dorothy, the front was the place to be to write about the War. Reporters were not allowed on the front, and so, Dorothy had to have a unique plan to make it to the front. Using a forged military pass, stolen military clothes, and the help of friendly soldiers, Dorothy made it to the front.

Dorothy spent ten days as a soldier on the front. She was a Sapper. Sappers dug tunnels and worked with explosive mines. Although, Dorothy refused to set off the fuse of the explosives that could lead to someone’s death. After ten days, a soldier she had trusted with her secret gave up her identity. She was arrested and assumed to be a spy. She was cross-examined by many English Generals and was even placed in a convent as a prisoner of war. While she was still arrested, Dorothy even attempted to again join the war effort in any way possible. She asked to be a dispatch rider, or someone who would relay urgent messages.

Dorothy was eventually released back to England. When she returned, she was not able to tell her story without permission from the army. Dorothy would go on to write Sapper Dorothy Lawrence, the only English woman soldier, late Royal engineers, 51st division, 179th tunnelling company, B. E. F. Censuring by the War Office hampered her success. Dorothy then spent the last forty years of her life in an asylum after speaking out about sexual abuse from her guardian in her youth.

Although Dorothy was silenced in her lifetime, her work has gained more recognition. A play has even been written about her. Dorothy’s story tells of her incredible bravery, determination, and strong personality. She found a way to make it to the front when no civilians could. She did not give up on her goal, spending nights in the woods and in a deserted house under constant bombardment. She risked everything to make it to the front. Dorothy writes that “jerks, not gradual phases, often mark life’s progress.” Her dramatic experience in France captures a momentous undertaking. Dorothy accomplished what no other person could do, and her work should not be censured but celebrated.

For more information on trench warfare and what it was like on the front in France, click here.