Born on September 24, 1940, Arati began her life in Bengal, in what was then British India. Her family was middle class Bengali Hindu, and Arati had one older brother and one younger sister. At the age of 2, she lost her mother. With her father enlisted in the armed forces, Arati’s brother and sister were sent to live with their mother’s brother, while Arati was raised by her grandmother in North Kolkata. 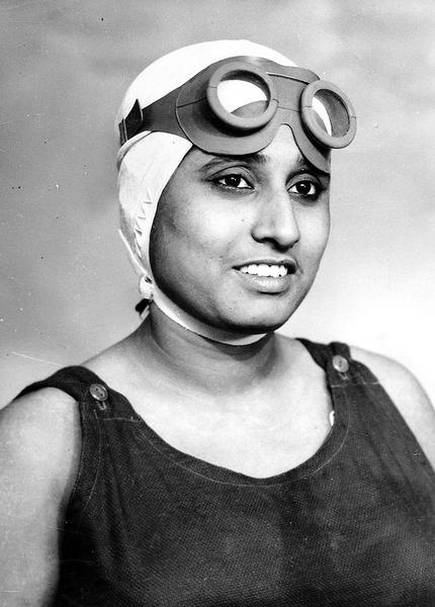 At the age of four, Arati accompanied her uncle to the Champatala Ghat for a bath, where she learned to swim. Noticing her interest in swimming, her father gained her admission to the Hatkhola Swimming Club. Within a year, Arati had won the gold in the 110-yard freestyle at the Shailendra Memorial Swimming Competition. She was just five years old.

In 1952, Arati represented India at the Summer Olympics in Helsinki. She was only 12 years old! Around this time, she heard of and became Inspired by Greta Andersen – a Danish-born female swimmer from the United States who crossed the English Channel in 11 hours and 1 minute. It is important to remember that the English Channel is the water-body that separates Southern England from Northern France and links the southern part of the North Sea to the Atlantic Ocean. It is also known as the “Mount Everest of Swimming” because of the length of the crossing, cold temperatures and the dangers of the journey.

In 1958, Arati wrote a letter to Brojen Das – who had just become the first person from the Indian continent to cross the English Channel, having participated in the 1958 Butlin International Cross Channel Swimming Race. Das wrote back, stating that Ararti could also achieve the feat. He later proposed her name to organizers of the race for next year’s event. Arati was well supported in pursuing the 1959 race across the Channel. When her fundraising fell short of her goal, Dr. Bidhan Chandra Roy, Chief Minister of West Bengal, stepped in to help fund her travel. Throughout, Arati trained long hours – including 8-hour continuous swims in Deshbandhu Park. She later swam a continuous 16 hours, showing almost no signs of fatigue!

On July 24, 1959, Arati left for England. She was one of only 5 women among 58 competitors to take part in the race, which began at 1am local time on August 27, 1959. Unfortunately, her pilot boat arrived late, causing her to start 40 minutes late and lose favorable condition. By 11 am, she had swum 40 miles and was within 5 miles of the English Coast. She faced a strong opposing current and, by 4pm, could only swim 2 more miles. She had to quit under pressure from her pilot.

On September 29, she made a second attempt at the crossing, swimming for 16 hours and 20 minutes in rough seas, successfully reaching the English coast and hoisting the Indian flag. She was 19 years old and the first Asian woman to cross the English Channel.

The next year, in 1960, Arati was awarded the Padma Shri — the fourth highest civilian honor in the Republic of India. She was the first sportswoman to receive the honor. She went on to complete Intermediate school from City College, and later married her swim manager, Dr. Arun Gupta. Together, they had a daughter. Arati was employed in the Bengal Nagpur Railway and died on August 23, 1994, at the age of 53.

Following her death, a bust of her was erected near her residence and, in 1999, a postage stamp of her was made. As Somak Adhikari of the India Times stated in November 2019, “Arati put Indian swimming on the map and was an idol to many girls who took up the sport. She is no more than a memory to the modern Indian sports fan but it is up to us to ensure that her legacy is not a mere footnote in the pages of our sports history.”