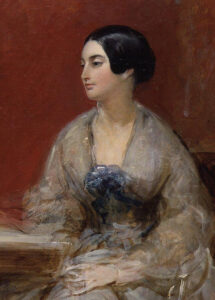 Born in London on 22nd March 1808, Caroline sheridan Norton was part of an influential and grand but poor family, the Sheridans. One of three sisters, they were enticing to those around them. All the siblings were considered beautiful and intelligent, with a tendency to show-off. Although loved by her family and peers, she was considered the more masculine of the three sisters from birth. When she was 8 years old Caroline’s father, a struggling playhouse owner, died. He left her and her family with many financial problems and debt. Shortly after, her brother Tom succumbed to consumption.

Caroline and her 8 siblings had no money and little influence. Luckily, their friendship with the Duke of York proved fruitful. The family were able to live comfortably in an apartment in Hampton Court Palace. However, in a time when dowries were necessary for a good marriage, Caroline was destitute. This meant that the girls were forced to rely on their beauty, charm and wit to entice a husband.

Caroline and her sister, Helen, exhibited a talent for writing and art from a young age. When they were just 11 and 12 respectively, they published their first book, The Dandies Rout. Despite its success, writing was considered more a hobby than a viable career. Even so, Caroline was described as “the Byron of modern poetresses”.

At 15 Caroline was sent to boarding school, where it was expected that she would learn to become more ladylike. While there she met George Norton. The 24 year-old Norton proposed marriage to the 16 year old Caroline, but Caroline’s mother stated that she was too young to marry. Mr. Norton would wait three-years before asking again; this time, his proposal was successful. Yet Caroline and George were wildly mismatched. George was an unlikable character and his career was not as promising as Caroline’s. They married on the 30th of July 1827.

They married when Caroline was 19. They moved to London to live together. This was not a fairytale love story, the kind of which Caroline had frequently written about. Rather her early married life was one full of violence and fear for the girl. Despite the abuse she faced in her new home Caroline continued to write to support herself and her first son. In 1829 at the age of 21 she published The Sorrows of Rosalie: A Tale with Other Poems. This work was inspired by her difficult relationship and foreshadows a future trend for the author in the way she gained inspiration from her own expereinces.

Caroline’s life was not easy. She was married to a violent and abusive man and both herself and her 3 sons suffered in consequence. Her life was riddled with scandal and sadness but despite this Caroline was a fighter. She continued with her writing throughout her life, also becoming a prolific political campaigner in trying to reform the marriage and divorce laws in the UK. To this day she leaves a legacy, as a writer she inspired the likes of Mary Shelley and as an activist it is thanks to her that women are able to have custody of their children.