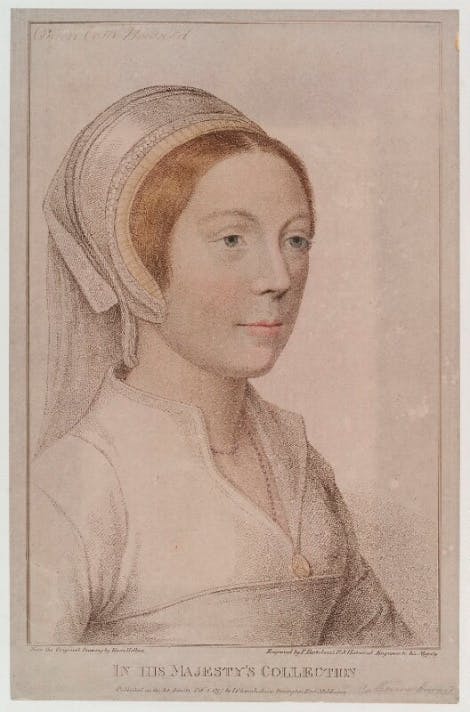 Catherine Howard: it is unclear whether there is actually a portrait of Catherine Howard. Just as the spelling of her name, her birthdate, and her agency in her relationship is unknown, so is what she looked like.

Born sometime between 1518 and 1525, Catherine was the younger child of Edmund Howard and Jocasta Culpeper. She was niece of the third Duke of Norfolk, and cousin to Anne Boleyn. Her connections meant she was of fairly noble birth.

Catherine grew up at Chesworth House, an 11,000-square-foot Tudor home. Her childhood has frequently been described as “scrabbled” — cut short by her parents early deaths. Around age 10, Catherine was sent to the household of Agnes Howard, Dowager Duchess of Norfolk and Catherine’s step-grandmother. Living in the Maidens’ Chamber, Catherine was to complete her education while she shared a dormitory with other wards. She was taught music, reading, and writing. Yet despite the appearance of security, the Maidens’ Chamber was anything but. Young men could easily get into the dormitory and there was “excessive fraternization” between pupils and staff. One such relationship was with Henry Manox, a teacher who fell in love with Catherine. Their affair was later ended by the Duchess, who found the pair alone. Catherine also had a relationship with Francis Dereham, a higher class servant, who courted her; she gave him the key to the Dormitory. This time, when the Duchess found out, she let the affair continue. By these accounts, it was known in Tudor circles that Catherine Howard was not the pure virgin she was expected to be. Whether these relationships were truly of Catherine’s volition, or if there was violence involved, we will never know.

Despite the scandal, Catherine grew to be a “petite, plump, pretty and accomplished in Courtly graces” young woman, whose easy charm and good nature made her a favorite. At some point, Catherine was likely sent to Court, probably as a maid in the household of Anne of Cleves, where she caught the eye of Henry VIII.

On July 2, 1540, Catherine became his fifth wife. She was likely only seventeen, often described by contemporaries as a “mere child”. Henry was an old man — and his impotence likely led him to seek the younger, more attractive wife in hopes of having another son. He showered her with gifts of jewels, clothes, and estates, and is said to have been completely enamored with her.

Yet the relationship was doomed. Within a few months, Henry took ill and became bad-tempered, unpredictable, and refused to see Catherine. Likely seeking attention, Catherine renewed her relationship with Thomas Culpeper – a relative and Gentleman of the Privy Chamber to whom she had once hoped to marry. Some scholars believe Catherine was the victim, with Culpeper targeting her in the hopes to marry her once the King died, taking advantage of her loneliness to raise his status. Yet one surviving letter from Catherine to Culpeper reveals that she was absolutely enamored with him and believed “she would be more pleasing to Henry if she kept herself in good practice.” Whether good practice meant simply flirtation and happiness, or if it meant sexual relations, it is hard to know.

In the letter, Catherine states to Culpeper, “…for I never longed so much for a thing as I do to see you and to speak with you, the which I trust shall be shortly now. That which doth comfort me very much when I think of it, and when I think again that you shall depart from me again it makes my heart die to think what fortune I have that I cannot be always in your company. It my trust is always in you that you will be as you have promised me…”

In November 1541 – just over a year since her marriage – John Lascelles became aware of the rumors and passed them on to the Archbishop of Canterbury. Her also told the Archbishop about Catherine’s time as the Duchesses’ ward and raised concerns about her virginity. The Archbishop was quick to inform the king, who ordered a secret inquiry to clear Catherine’s name.

Whatever his hopes, Henry soon found out his young bride was anything but a blushing, innocent virgin. The French ambassador discovered that Catherine had been violated by Francis Dereham from the ages of 13 to 18, which he suspected included time that Catherine had been married to Henry. However, scholars believe the ambassador was simply trying to get rid of Catherine – as the evidence does not match the timeline. Francis Dereham later confessed to sexual relations with Catherine, but claimed they had been contracted to marry – which, in Tudor times, made premarital sex acceptable. However, it also made Catherine a bigamist – since having premarital sex was said to make the marriage binding. By marrying Henry, Catherine had engaged in bigamy.

Catherine wrote a letter of confession, and begged for mercy, but it was too late.

On November 22, the Queen was stripped of her titled. Within weeks, Dereham and Culpeper were executed as traitors, and Catherine’s relatives were arrested and imprisoned. Many were later pardoned.

On January 21, 1542, a Bill of Attainder against Catherine was introduced in Parliament. The warrant for her death was signed on February 11, and she was executed two days later. Despite the tragic end, Catherine was said to remain steadfast in her countenance and constant in her emotions, acknowledging her faults and asking for prayers shortly before she was executed. She was buried in the Tower Chapel of St. Peter and Vincula, where a floor marker underneath the altar commemorates her.

Was Catherine a willing or unwilling participant in her affairs? The evidence points to somewhat willing – though whether a thirteen year old girl, under wardship and surrounded by young men, could truly be willing is up for debate. In some affairs, it is clear Catherine was enamored – much like any teenage girl, which likely made her willing. It is also clear that Catherine didn’t understand the ramifications of her actions. Despite a supposed education, the Duchess obviously did not instill a sense of court norms and Tudor expectations in Catherine – instead allowing her to engage in affairs that, at court, would be scandalous. By sending her to Court, the Duchess doomed Catherine – who was ill prepared for the expectations that would be placed on her.