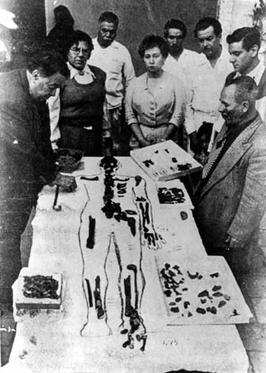 Eulalia Guzmán Barrón was born on 12th February 1890 in San Pedro Piedra Gorda, Mexico but moved to Mexico City with her family when she was 8 years old. From an early age, Guzmán was aware of gender inequality and was determined to challenge the idea that women were resigned to domesticity. In a bid to reject the traditional gender roles, Eulalia studied to become a Teacher at the Normal School for Teachers. For girls in Mexico at the time, this was a courageous move and one that shows a real dedication to challenging the gender roles in Mexican society.

Aged 16, Eulalia co-founded ‘Admiradoras de Juárez’ (Fans of Juárez) with 3 fellow Mexican women. The organisation was a militant society that fought for women’s suffrage and demanded an end to sexual discrimination. During the Mexican Revolution (1910-1920), women’s rights became a topical political issue. Although the vote for women in Mexico was not granted until 1953, activism and work such as Guzmán’s will have undoubtedly played a role in that decision. It’s sad to think that across the world, women of all classes, professions and races have had to fight tooth and nail to achieve voting rights and in some countries, women’s suffrage still hasn’t been achieved. Women like Eulalia gave others a space to challenge inequality and discrimination; something that is a truly powerful opportunity.

Guzmán also co-founded the ‘Corregidor de Querétaro Vocational School’ which supported women in learning new skills to improve their economic opportunities. The theme of teaching women how to support themselves through expanding their vocational skills is such an important part of feminist movements across the globe which has enabled women to take control of their own money and expand their job opportunities. Guzmán’s work through the School will have provided numerous women to support themselves in a society that was filled with inequality and barriers for women.

In 1921, Guzmán was given the opportunity to travel to the United States to investigate the American educational system. While there, she represented the Mexican Feminist Council at the League of Women Voters convention and contributed to the Pan-American Conference of Women. Being given opportunities such as these proves how important Eulalia’s views and activism were to her fellow Mexicans; giving her a voice for women across the country.

A passion for history led to Guzmán being involved in archaeology in the latter part of her life. In 1933, she became one of the first women to take part in Mexican archaeology when she assisted the excavation of Tomb 7 in Monte Albán. A year later she became the first person to study the pre-Columbian site of Chalcatzingo. Her archaeological work led to her appointment as Director of Archaeology at the National Museum where she built up a large collection of objects relating to Mexican history and culture. Alongside being a public educator, Eulalia also gained degrees in both Philosophy and Archaeology.

The fact that Eulalia worked so hard to challenge gender stereotypes to work in two fields that are often inaccessible to women is inspiring for young women who wish to break into male-dominated spheres. Having role models like Guzmán in archaeology, education and museums proves to young women that not only can you enter into these fields, but you can do exceptional work that will impact future generations.
Eulalia Guzmán died on the 1st January 1985 in Mexico City, aged 94 years old. Her work and activism are still held in high regard in Mexico especially by women who look to her as inspiration for what can be achieved by women in traditionally male-dominated spheres. Guzmán’s legacy is celebrated through festivals in Mexico and the Square in her hometown has been renamed in her honour.