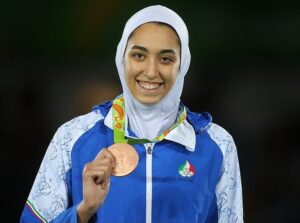 Kimia Alizadeh from Iran won bronze medal in Taekwondo at the 2016 Summer Olympics.

Born on July 10, 1998, Kimia Alizadeh’s family are Iranian Azerbaijani, also known as Iranian Turks. At the age of 16, Kimia burst onto the stage by winning gold in the women’s Taekwondo 63 kilogram class at the 2014 Nanjing Youth Olympics. During the games, she carried the Iranian flag. The next year, she won bronze at the 2015 World Taekwondo Championships.

At the age of 18, Kimia won bronze in the Taekwondo 57 kilogram weight class at the 2016 Summer Olympics in Rio de Janeiro, making her the first Iranian woman to win a medal at a Summer Olympics. Upon ending her match, Kimia is said to have fallen to the floor and kissed the mat. Kimia stated of her bronze medal, “I am so happy for Iranian girls because it is the first medal and I hope at the next Olympics we will get a gold.”

Her win propelled her into the national spotlight, and Alizadeh became a hero for girls and women in the country. Iranian President Hassan Rouhani was quoted in the regime-friendly Tehran Times as saying that she had “shown the world Iranian and Islamic culture and demonstrated the courage and competence of Iranian women.”

Kimia followed her Olympic success by winning silver at the 2017 World Championship. Just two years later, she was listed as one of the BBC’s 100 Inspiring and Influential Women.

Yet, on January 10, 2020, Kimia’s career in Iran ended. She defected from Iran and took up residence in Hamburg, Germany. While on a European vacation with her fiancée, they decided to remain in Europe and apply for asylum. In an Instagram post, she explained, “Let me start with a greeting, a farewell or condolences. I am one of the millions of oppressed women in Iran who they have been playing with for years. They took me wherever they wanted. I wore whatever they said. Every sentence they ordered me to say, I repeated. Whenever they saw fit, they exploited me. I wasn’t important to them. None of us mattered to them, we were tools. The virtue of a woman is not to stretch her legs!” She went on to explain that she didn’t want to remain in a country of hypocrisy and lies, injustice and flattery – “My troubled spirit does not fit with your dirty economic ties and tight political lobbies. I wish for nothing else than for Taekwondo, safety and for a happy and healthy life.”

Kamia’s defection came during anti-government protests in cities across Iran, resulting from Iran’s admittance that it accidentally shot down a Ukrainian passenger airline, killing all 176 people aboard. She is one of many Iranian athletes who defected or made the choice to stop representing Iran. They include some Iran’s biggest sports stars, who often face pressure to intentionally lose matches in order to avoid being matched with Israeli opponents – whom they are forbidden to compete against for political reasons. As anyone who knows world sports can say, such reasoning is discouraged in sports federations. Additionally, by 2020 in Iran, female athletes face censorship on television and the media, are banned from taking part in international competitions, and required to wear the hijab – the Islamic headscarf – while competing.

As the Women’s Committee of the National Council of Resistance of Iran (NCRI) wrote: “Iranian female athletes and competitors make such achievements… while they are deprived of the minimum support they should be receiving both legally and practically. Despite overcoming all the obstacles, they face, and [winning] championships, they run into the wall of the misogyny of the mullahs’ religious dictatorship which makes it impossible for Iranian female athletes to continue their professional life in Iran. Ultimately, they prefer to leave their homeland rather than continuing their careers under the mullahs’ rule.”

According to Lena Felton of The Lily, Kimia’s decision is not to be taken lightly. Felton interviewed Nahid Siamdoust, an anthropology lecturer at Yale, who stated “I see Alizadeh’s defection partly as part of this momentum that’s happening, where people are taking positions vis-a-vis the Islamic Republic, whoever has any kind of voice…. But partly, of course, this is also about female athletes criticizing their handling by the government, the way in which their bodies have been disciplined.”

As Felton went on to explain, Kimia’s decision is among the many youth who have been clamoring for change in recent years, calling for greater human rights and a more participatory government. She also joins a rich history of Olympic athletes defecting amid political turmoil, which dates back to 1948 when Czech gymnast Marie Provaznikova defected upon Czechoslovakia becoming a satellite for the Soviet Union.

Reflecting on the post overall, history professor Firoozeh Kashani-Sabet stated, ‘“What’s touching about her post is that she’s basically saying that she’s first and foremost a woman,” Kashani-Sabet says. “She distances herself from her accomplishments and gets to the basics of it, which is her sense of deprivation as a woman.”

Kimia states she will never return to Iran, but that she has “a great feeling to have made a decision for my life that would definitely change my future,” she said. “I think it is not even clear enough now and. in the years to come, I will understand what a good decision I made.”