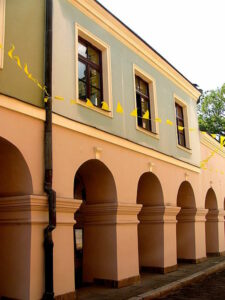 Rosa Luxemburg was born in March 1871 in Poland. At the time Poland was controlled by the Russian Empire. She was the youngest of five children, born to a lower middle-class Jewish family. Her father was a timber merchant and her mother was descended from a notable line of rabbis and scholars. Jewish by birth, she was frequently persecuted and could not escape anti-semitism. Whilst they observed Jewish holidays, she and her family sought to assimilate with Polish culture and eradicate the differences that separated them from the rest of their community. Despite this, as a young girl Rosa could sense she was not the same as her classmates; not only was she Jewish, but also because a childhood illness left her with a limp (which she dressed carefully to conceal). However, she was also determined to lead an independent life.

She was massively committed to her education, and whilst in school became involved in underground socialist political activities that were taking place. Like others who challenged the Russian regime at the time, she was faced with the threat of prison and was forced to flee. In 1889 at the age of 18 she left Poland and took refuge in Switzerland. Although she could be considered a feminist of her time, she never claimed to be or associated herself with feminism; she rejected the idea that she belonged to the feminist movement because of her sex, despite continually defying the constraints of her gender. Rosa regularly criticised the “bourgeois” feminist movement for ignoring issues of class, and held a true belief that equality was for all people and could only be achieved if class boundaries were dismantled. Whilst in Switzerland she continued to pursue her education and political activism, being awarded a Ph.D in law and joining a group of exiled revolutionaries to become one of the leaders of the young Polish Social Democratic Party. Her involvement in the party meant she was even more wary of being sidelined for being a woman.

When Rosa was 23 she married Gustav Lübeck in order to acquire German citizenship. She is remembered for her commitment to Marxism and socialist politics, and died a martyr on January 15th, 1919, after co-leading the November Revolution after World War I.