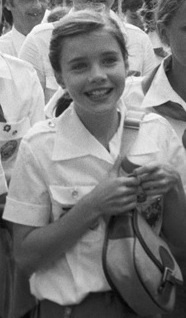 Samantha did not receive a reply for a long time. Instead she found out her letter had been published in a Soviet newspaper in April 1983. So she wrote to the Soviet Ambassador to the United States asking if she would get a reply. In response she got a letter back from Yuri Andropov. He stated he did not want war with the US and asked Samantha and her parents to come visit the Soviet Union in the summer. What a response! The US media publicized her story and as a result, Samantha became a young American ambassador for peace.

`In July 1983, Samantha and her parents went to the Soviet Union as guests of Yuri Andropov. She visited Moscow, Leningrad (now St. Petersburg), and Artek, a Soviet pioneer camp on the Crimean Peninsula. The Soviet media followed her trip closely and she declared the Russian people to be “just like us.” The trip was such a success that later in the year she was also invited to Japan to attend a Children’s International Symposium. She gave a speech at the symposium and suggested that the American and Soviet leaders should exchange granddaughters for two weeks every year because a president “wouldn’t want to send a bomb to a country his granddaughter would be visiting.”

Samantha continued her activism with a T.V. special, Samantha Smith Goes to Washington: Campaign ’84. She interviewed political leaders across all parties about the main issues of the campaign. She continued to travel the United States speaking to groups as a goodwill ambassador. She also started to guest star in other T.V. shows. One of these took her to London in August 1985. On the way back with her father, both were killed when the small airplane they were travelling in crashed on August 25th, 1985.

In both the U.S. and the Soviet Union, Samantha’s death was met with sadness. Her mother began the Samantha Smith Foundation to continue her work fostering peace through international friendships of children. The state of Maine marked the first Monday in June as Samantha Smith Day and in the Soviet Union she had her likeness on a stamp and an asteroid named in her honour.