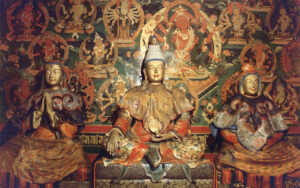 Born in Chang’an (now Xi’an, Shaanxi Province) in around 628, the life of Princess Wencheng Li holds major cultural significance for both Chinese and Tibetan society. Her name roughly translates to “Princess Civilizer.” Born into a branch of the Tang Dynasty royal family, her role in history is a part of the greater Sinicization, which refers to when non-Chinese societies come under the influence of Chinese culture.*

Princess Wencheng was just 13 years old when she married King Songtsen Gampo of the Tibetan Empire in 641. The marriage came after years of the King requesting the Princess’ hand in marriage and was finally accepted in a reported political move to maintain relations between the Tang Dynasty and the Tubo. At the wedding, the King wore traditional Chinese dress and followed the customs of the Han Chinese to showcase the relationship between the two cultures.

When the princess moved to the Kingdom of Tubo (modern day Tibet) with her new husband, she took an assortment of skills and knowledge that would prove to be extremely useful for the Tibetan people. Trade agreements, scientific advancements, agricultural methods, and medical books brought over from the Tang Dynasty all supported the development and growth of Tibetan society. The princess’ dowry – ‘a transfer of parental property, gifts, or money at the marriage of a daughter’ – provided locals with resources such as fabric, seeds, and tools to support new agriculture and manufacturing ventures.

Princess Wencheng has been credited with personally teaching local people skills in farming, weaving, and winemaking. She also brought over lots of art, music, and sculptures that expanded Tibetan culture. Not only this, but she was also allegedly responsible for introducing Buddhism to the area; a religion that is now practiced by over 7% of the world’s population. The customs and practices she shared helped introduce ideas and traditions to the Tibetan people which are still practised today.

The idea that a young woman played such an important role in bringing two societies together and sharing customs and beliefs that are still prevalent in the communities today is a relatively rare occurrence. Throughout history, white, middle-class men are attributed to bringing cultures together in both positive (and negative) ways, so the fact that a young woman was able to have such influence and impact seems a rarity. Her role in bridging the different cultures, making historic contributions, and enhancing the relationship between the Tang and Tibet is still very much appreciated and celebrated by many in both Tibet and China.

It is thought that Princess Wencheng died between 680-682. The story and role of Princess Wencheng are still celebrated in both China and Tibet today in the form of murals, folk songs, art, and plays. The 15th of April and October in the Tibetan year are marked by singing and dancing in her honor. A thangka embroidered by the Princess is kept in one of the chapels at Tradruk Temple in Nêdong.

*Despite Princess Wencheng’s seemingly peaceful and harmonious role in bringing China and Tibet together in the 7th century, it is worth remembering that throughout history, Tibet has had a tumultuous relationship with China. It has spent parts of its history operating as an independent state whilst other periods were spent under Chinese or Mongolian rule. Many Tibetan citizens accuse China of religious, economic, and political repression whilst Beijing authorities argue that they have enabled Tibet to expand in these areas due to its rule.