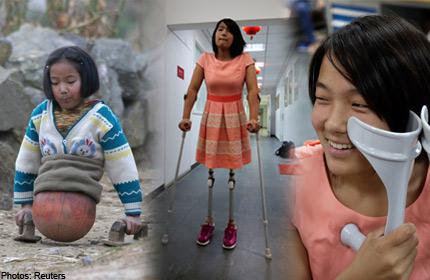 Born in 1996, Qian lost both her legs in a car accident at the age of four. In a later interview with China Daily, she stated, “I just remember that when I woke up, my legs felt very cold. I said, ‘Mum, put my shoes on for me,’ but my mum didn’t say anything. Her tears fell onto my face and I found that, for the rest of my life, I wouldn’t have to wear socks, or shoes, or even pants again.”

Growing up in a rural area, her impoverished family had to improvise to care for her. Her grandfather taught her to walk using her hands and the help of a basketball cut in half to steady her, for 5 years. This led many to call her the “basketball girl.”

At 9 years old, the Chinese press took notice of her story. Thanks to their attention, she traveled to Beijing and received her first artificial limbs and was given donations to attend primary school. She has gradually been fitted with bigger limbs as she grows up. Despite the attention, Qian’s education ceased at age 11, the same year that donations for her schooling ran out. She returned home to her family in Yunnan.

To fill her time, Qian joined a local swimming club for the disabled – the first of its kind in the country. “I had to give much more than other kids when I learned to swim. It seemed there was no way I could float in the water. I was choked,” she told China Daily in 2011. Later, once she learned to swim well, she stated, “I used to envy my classmates a lot. After school, they always went home running and jumping, and I couldn’t do that. But when I’m in the water, I’m the same as them, and this is why I love swimming.”

At the club, Qian trained four hours a day, aspiring to participate in the Paralympic Games. In 2009, at age 13, she won a gold and two silver medals at the Chinese National Paralympics Swimming Competition. Within a year, she had received a total of 4 gold and 5 silvers in similar games.

In 2012, Qian received a bronze in Paralympic qualifiers, but it wasn’t enough to secure a spot on the team. Despite the setback, she continued training. At age 18, she received adult prosthetics. Her progress continues to be reported in national news, spreading abroad through viral posts on Facebook.

In 2016, at age 19, Qian qualified and participated in the Rio Paralympics. She finished 9th overall in the 100-meter breast stroke.

As of that same year, and despite generous offers of help, Qian prefers to do things independently. Although training occupies much of her time, she also enjoys seeing movies on the weekends.

Most notably, Qian’s success has contributed to more positive treatment for the disabled in China. As her coach, Li Ke-qiang, told the BBC in 2008, “In the past, people despised the disabled. They thought they were all beggars, just asking for money. But now, when they see disabled swimmers like these, they can see how hard they’re driving themselves. And that’s a start.”

Qian plans on taking part in the Tokyo Paralympic Games, which were slated to be held in 2020 but postponed due to the COVID-19 pandemic. Unfortunately, at the time of writing, little had been published about Qian and her story has seemed to be in the shadows since the 2016 Rio Paralympics. We hope she resurfaces soon!