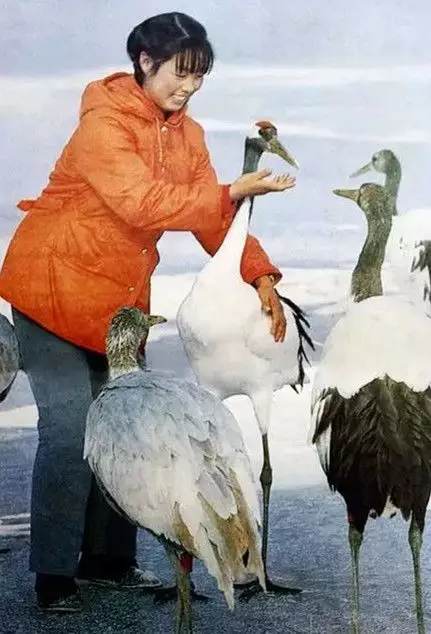 Our story begins in Heilongjiang Province in 1979 when Xu Tielin, a fisherman living in the Zhalong wetlands in northeast China, and his wife rescued their first-ever injured red-crowned crane and nursed it back to health. At the opening of the Zhalong National Nature Reserve the number of living red-crowned cranes was just 150. The couple made history by becoming the first full-time crane breeders in China and thus, the first-generation crane protectors. Their daughter, Xu Xiujuan, was 15 years old when the reserve began. By 1986, 22-year old Xiujuan followed in her parents footsteps and became a second-generation crane protector by taking on duties at the reserve and participating in artificial hatching experiments which would aid in the repopulation efforts. Her passion for the birds and determination in scientific experiments resulted in Xiujuan achieving the first successful artificial hatchling being born on the reservation.

In September 1987, a pair of swans broke free and flew away while Xiujuan was bathing them. Though very ill at the time, she went looking for them. When she heard fluting swan calls from the opposite of a river, she waded through the water toward them. The two birds were soon found, but Xiujuan went missing. Her body was later retrieved from the river. Unfortunately she drowned from exhaustion in her search and came to be known as China’s first environmental protection martyr. Near her grave in the reserve, a memorial hall has been built to tell her heroic story to visitors.

Ten years after the tragic incident, her parents convinced Xu Jianfeng, her brother, to give up his urban job and return home to become a red-crowned crane protector. He worked as a protector for nearly 18 years honoring his sister’s memory before meeting a similarly tragic fate. In the spring of 2014, Jianfeng went for a routine check to inspect cranes’ nests. On the way, he lost control of his motorbike and crashed into a swamp where he ultimately drowned. With all this tragedy, it is amazing the family has not given up on the reserve and the red-crowned cranes. Instead of closing their doors, the family announced in 2017, that Xu Zhuo, daughter of Jianfeng and niece of Xiujuan, has taken over the job becoming the third-generation to continue protecting rare birds at Zhalong National Nature Reserve.

To understand why someone would give so much for a bird, you must understand what the crane means to Chinese culture. In mythology, they symbolize immortality and nobility, and are a frequent motif in artworks. Depictions of cranes have been found in ancient Shang Dynasty (c.16th century-11th century BC) tombs and Zhou Dynasty (c.11th century-221 BC) ceremonial bronzeware. Thanks to the efforts of the Xu family the number of living red-crowned cranes is over 400. Not only has the Xu family saved the rare bird from extinction, they have also protected the natural environment from being destroyed.

The reserve, along with four other wetlands in the province, was inscribed on the UNESCO World Heritage list in August 2019. The wetlands cover more than 2,400 square kilometers, about one-third the area of Shanghai. A small portion of the reserve, where some red-crowned cranes are raised for scientific research, is open to the public. Pan Chenglong, a carer with the reserve, says “The story of Xu Xiujuan is known to everyone in Yancheng. I have heard her story since I was very young. She was my childhood hero, and I’m glad that I do the same job as she did.”