One of the most speculated evidence for female gladiators comes from the excavation of the “gladiator girl” in 1996 in the 165 Great Dover Street, Southwark London excavation. Here, archaeologists uncovered a Mid-Second Century roadside burial. Roadside burials were funerary monuments of wealthy Romans meant to be viewed by travellers along the road. The excavations discovered temple sites, walled cemeteries, and an unwalled cemetery. The Great Dover Street excavation produced 25 inhumation (burial) graves and five cremations. These graves provide important information on burial and funerary customs, especially since the site contained “no excess of males over females in the cemetery.” 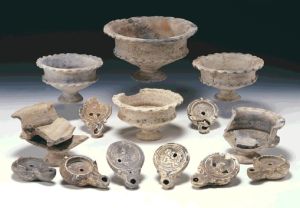 This image depicts the lamps and other objects found in the “Gladiator Girl” grave.

The Gladiator Girl is a cremation burial with a collection of unburnt lamps and tazze, which are thought to be incense burners. The evidence shows a cremated, adult woman from the First or Second Century. The lamps provide clues to archeologists that she may have been a gladiator. One of the lamps shows a fallen gladiator with his shield in front of him. Identical lamps have been found in other archeological excavations too. In addition, other lamps show depictions of Anubis, an Egyptian deity that was associated with the god Hermes (Mercury) and guiding souls to the afterlife. The gladiator girl may have been part of a Cult of Isis. Isis, was an Egyptian goddess viewed as a protector of women by some. Additionally, there was thought to be a temple of the cult in London during the Roman period. These lamps suggest that the person buried was a female gladiator.

Popularized as the gladiator girl by the British media, some archeologists believe that she could have been a gladiator. They believe her admirers may have given her a lavish burial with the lamps and tazze as offerings. However, other archeologists dispute this story and think the lamps are not symbolic of a female gladiator. In the excavation study, Angela Wardle writes that the cremation burial of one of a female gladiator is certainly possible. However, a more “acceptable” interpretation is that the gladiator lamp symbolizes funeral games, the origin of gladiatorial combat in ancient Rome. Is it “acceptable” to modern researchers that girls and women did not participate in gladiatorial games because it subverts the traditional narrative of women being in the home and not participating in sports? Or is it simply, because there is not enough conclusive research to determine the life of this “gladiator girl”? The lack of research may be because past researchers, not wanting to see girls as gladiators, misidentified or ignored research that could further provide information on girl gladiators.