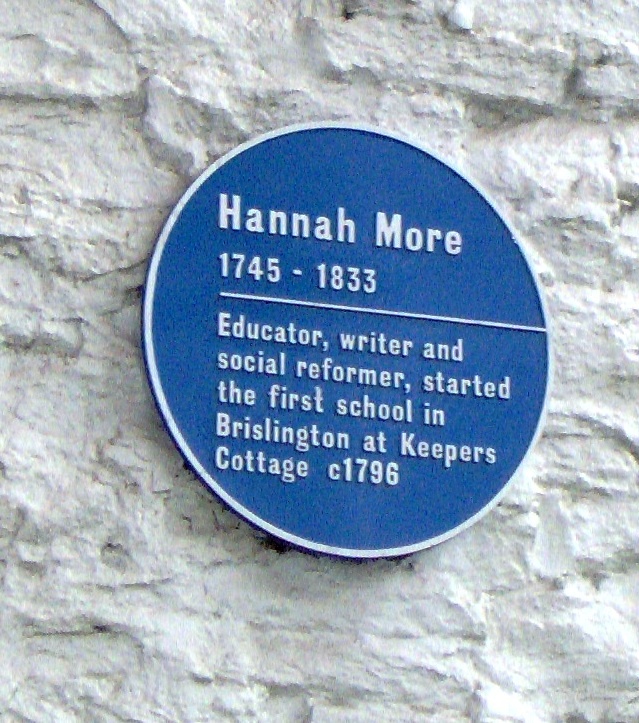 Born in the 1700s, Hannah More was the fourth of five daughters. Her family moved frequently due to her father’s occupation. As a result, Hannah and her sisters met a variety of people from different economic and religious backgrounds. This greatly influenced her later writing and philanthropic work.

Her father settled as a schoolmaster in Bristol, and in consequence she and her sisters were highly educated and intelligent. These were undesirable qualities in a woman at the time. From a young age, Hannah honed her writing skills, whilst working at a boarding school. In 1762, at the age of 17, she wrote the play The Search After Happiness. By the mid-1780s, the play had sold over 10,000 copies.

Hannah became engaged to William Turner. They were together for nearly seven years, with Hannah writing throughout this period. They never married. Hannah was becoming too old to find suitors, and in fear of impending spinsterhood, had a nervous breakdown. In compensation, Turner paid her £200 a year. This enabled her to give up teaching and focus on her writing.

Her writing became increasingly popular, and because of this, she was able to meet many famous actors and London residents. One of which was William Garrick. Garrick became a mentor to Hannah, but sadly passed away shortly after she moved to London. Garrick’s widow allowed Hannah to stay with her for six months out of the year. Subsequently, she became engrossed in London’s high-literary society. She was one of the early members of the Blue Stocking Society, which enabled Hannah to keep battling the prevailing gender norms of the time, as it was a space where both sexes could discuss education and have intellectual conversation. Through this society she met prevalent abolitionist William Wilberforce.

Influenced by her friendship with Willberforce and her own puritan beliefs, she began publishing anti-slavery think pieces and propaganda. Willberforce even used one of her poems Slavery in a debate in parliament:

The shrieking babe, the agonizing wife!

She, wretch forlorn! is dragg’d by hostile hands,

Hannah, along with her sister, Martha, continued to do work in education and advocating for the poor. They moved to Surrey to help the impoverished and continue fighting their cause but were met with challenges. Many farmers in the area were concerned that education for females would mean that girls would neglect their domestic duties. The sisters set up 12 schools in total, for poor children that were often looked down upon by the community. They also continued to advocate for women and set up social clubs and spaces where women could socialize and exchange recipes. Although the sisters encouraged wealthy community members to donate to the cause, Hannah found that she was frequently using her own money from her plays and writings to fund her charitable endeavors.

In her 60s, Hannah moved away from the area in Surrey in which she had set up the school. She wanted more space. Eventually, all the More sisters would live together. Hannah died at the age of 88 in 1833, and has been frequently referred to as the “first Victorian.”