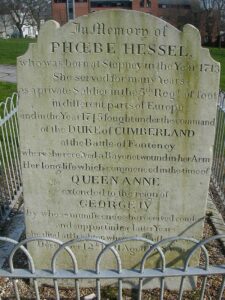 In March 1713 in Stepney the girl Phoebe Hessel was born, and she was destined for greatness. There are various suggestions about why Phoebe, at the age of 15, wanted to pursue a career as a soldier. This was a time when women and girls didn’t have careers, and a girl serving as a soldier was unheard of. The explanations why Phoebe joined the army vary. They include following her soldier-father to war, after the death of her mother. And falling in love with a Soldier by the name Samuel Golding and following him to war. We do not know for certain what led Phoebe to pursue such a career path, but we do know that at 15 years old Phoebe donned a pair of breeches, and committed to the unpredictable and dangerous life of a soldier.

Phoebe, as part of her role as soldier travelled widely and with more freedom than others of her gender at the time. During her time in the army she served in the West Indies, Gibraltar and Britain. Phoebe was able to maintain the pretence of being a man and was able to serve as a soldier for 17 years. Her time in the army ended after being wounded in Belgium. She was revealed as a woman and promptly discharged.

Phoebe’s connection to Brighton was through her second husband Mr Hessel, a local fisherman whom she married shortly before his death. Following the death of her husband, Phoebe pursued a job as a peddler. She was brought to the attention of the Prince Regent through tales of her formidable heroics and deception. The Prince Regent awarded Phoebe with a pension after hearing these stories. She has been connected to Brighton and its iconic Royal residence, the Brighton Pavilion since. But her story and connection with Brighton does not end there. There is a rumour that when drinking in a pub one evening Phoebe overheard a conversation. One of the participants of this conversation was James Rook, the highwayman. Supposedly, Phoebe apprehended the criminal. In doing so she further solidified her connection with the area of Brighton.

Phoebe Hessel had a colour filled life, she experienced pain, war and the death of loved ones. But she persevered and continued to live her life in the truest way she knew how. Fighting bad guys and destroying gender expectations. Phoebe lived for 108 years and through 6 royal reigns. She now resides in Brighton in the St Nicolas Churchyard. Phoebe will forever be immortalised on the Brighton 7 and 49 bus route.