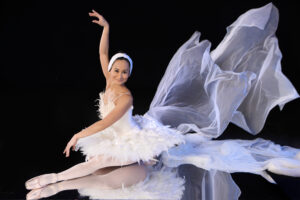 Prima Ballerina – Lisa Macuja Elizalde in full costume as the White Swan for her Swan Song Series back in 2013. Image from Ballet Manila.

Lisa Teresita Pacheco Macuja-Elizalde was born on October 3, 1964 and is a Filipino prima ballerina. In 1984, she broke barriers for Fillipino dancers by becoming the first soloist foreigner to join the Kirov ballet in Saint Petersburg, Russia. Not only did she dance in foreign countries but she also brought the art of ballet to her people and her people to the ballet.

Lisa began studying ballet at the age of eight under Felicitas Radaic at the St. Theresa’s College School of Dance, where she advanced to become a member of the semi-professional Dance Theater Philippines. By 1982, at 16 years old she received a scholarship from the USSR Ministry of Culture to study at the formidable Leningrad Choreographic Institute (now the Vaganova Academy of Russian Ballet) in Saint Petersburg under the tutelage of Tatiana Alexandrovna Udalenkova.

After graduating at the top of her class in 1984, she became the first foreigner to be invited to join as soloist the historic Kirov Ballet. While there, she debuted as principal ballerina in full-length productions of The Nutcracker, Don Quixote, and Giselle at the Mariinsky Theater. After dancing with the company for four years, she decided to return home to Manila in 1986, where she was named the first artist-in-residence of the Cultural Center of the Philippines and performed as guest artist with Ballet Philippines.

In 1988 she became a principal dancer of the Philippine Ballet Theatre. As an international guest artist, she has performed principal roles with foreign companies in various full-length performances in Russia, the United States, Cuba, Mexico, Japan, South Korea, Malaysia, Singapore, Lithuania, Latvia, Ukraine, Georgia and Armenia. In 1995, she established her own company, Ballet Manila, together with her partner, Osias Barroso and ten other young dancers. Since its founding the company has put on 5,000 local and 200 foreign performances in the past 19 years.

Lisa launched her Swan Song Series in 2011 to say goodbye to her favorite roles leading up to her retirement in 2014. In order to preserve the art for the future, Lisa also established Project Ballet Futures, a program where poor but promising young boys and girls are given free ballet training, apparel, meals and allowances to help them reach their dream of becoming professional dancers. Offstage, Lisa is recognized for her vision and leadership in the local arts community. She served as Commissioner of the National Commission on the Role of Filipino Women and as Vice-Chairman of the Philippine UNESCO National Commission. She is also founding board member and treasurer of the Artists Welfare Project, Inc. (AWPI) which aims to provide access to health, financial and legal benefits for Filipino artists and cultural workers.

In December 2015, she was accepted as a Member of the International Dance Council CID at UNESCO, the official world-wide organization for dance. In May 2016, she was recognized with the Filipino Woman of International Distinction Award by the National Federation of Women’s Club of the Philippines. In August 2016, Lisa became the first Filipina artist to sit as a member of the jury in the Pre-Competitive division of Asian Grand Prix (AGP) Ballet Competition in Hong Kong.  She returned as a jury of the same division in AGP 2017.  In July 2017, Lisa served as a jury member in the 2nd International Scholarship Korea Ballet Competition Seoul, South Korea As an arts educator and advocate, she has also received multiple trophies from the Catholic Mass Media Awards, the KBP Golden Dove Awards, and Gawad Tanglaw, for her groundbreaking art and culture talk show, Art 2 Art, which airs weekly over DZRH and RHTV and which can be accessed online via www.dzrh.com.ph.